Royal Chapel of Granada - Burial Place of the Catholic Monarchs

The Royal Chapel is located between Granada Cathedral, the old Fish Market and the Church of Sagrario. The construction of the Royal Chapel of Granada wss ordered by the Catholic Monarchs in 1504 as a place of burial for their bodies. 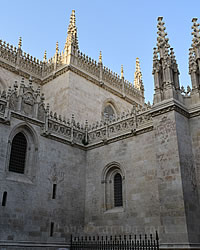 The monarchs died before the chapel was finished, and their bodies rested in the convent of San Francisco de la Alhambra (today the Parador Nacional de Turismo) until the Royal Chapel was completed. 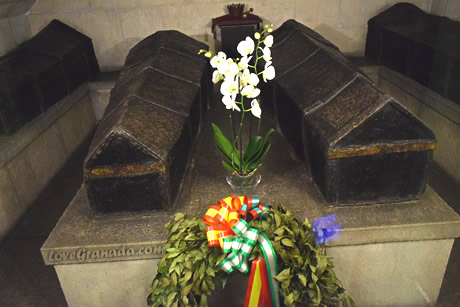 Charles V was subsequently commissioned in 1521 to move the bodies of his grandparents to the newly completed chapel.

Carlos V buried almost all the dead of the family in the Royal Chapel, including Ferdinand and Isabella, Philip the Handsome and Joanna the Mad, his wife Elizabeth, their children and Princess Maria of Portugal, wife of Prince Philip.

It was Philip II who moved everyone buried in the chapel to his newly built Escorial. He left only the Catholic Monarchs and their children Philip and Juana, who currently lie with their parents. 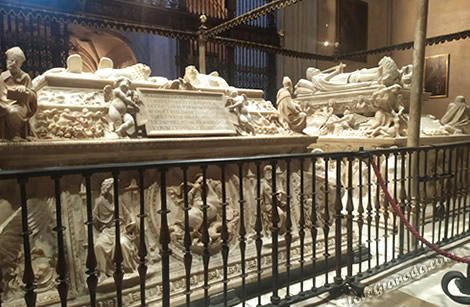 The burial monument of the Kings is the work of the Italian Domenico Fancelli, who built it in Genoa with Carrara marble, while that of Joanna the Mad and Philip the Handsome is the work of Bartholomew Ordenez.

La Capilla Real de los Santos Juanes is embedded in the Cathedral and set in a magnificent setting of the historic city centre.

It is one of those monuments that any city in the world would be proud of.

This Museum was created in the Royal Chapel's Sacristy and contain the most valuable belongings of the Catholic Monarchs.

This Sacristy-Museum contains a great collection of paintings from the Flemish, Italian and Spanish schools, with paintings by important artists such as Juan de Flandes and Hans Memling and Botticelli.

There are items of great historical value, such as the crown and the scepter of the Catholic Monarchs. Some of the highlights of the museum are the Queen's chest and mirrow.

There is also an amazing Missal, a beautiful book painted by Francisco Flores in 1496 for the Queen.

The The Sacrity-Museum is a part of the Royal Chapel, therefore it's included in the same ticket.

The Royal Chapel of Granada is open again for cultural and touristic visits on a temporary schedule:


Royal Chapel Location and How to Get There It is located in a privileged area of the city, near the Alcaiceria, the Bib-Rambla square, the Madraza and Plaza Isabel la Catolica.

© Copyright • LoveGranada.com • Any use of the content, including copying of it in whole or in part is prohibited.
Opinions about Royal Chapel of Granada
5 euros is a really good value

The entrance is only 5 euros to enter with the audio guide included, a really good value. You need about one hour to see it. This is next to the Cathedral but the admission is separate from entrance to the cathedral.

It is advisable to wear something warm, it’s a bit cool there.
A beautifully decorated chapel

Apart from being the final resting place of Queen Isabella and King Ferdinand it is also a beautifully decorated chapel where you can find Queen’s crown and scepter and the organ with 4000 pipes.

To avoid long queues it is better to see it between 14:00-16:00 when most people will be eating. Photography is not allowed in the chapel.

Alhambra Tickets
Where and how to buy tickets for the Alhambra and where to collect them, what to do if tickets are sold out.
Home » Granada Monuments » Royal Chapel