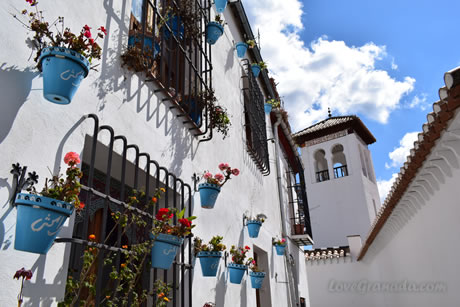 Granada, in the south of Spain, is one of the eight provinces of Andalusia. With 924,550 inhabitants, Granada province is the fourth most populated in Andalusia. 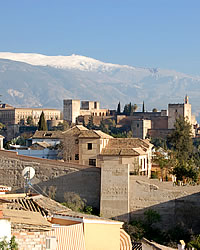 It has 170 municipalities and about 30% of the population lives in the capital. 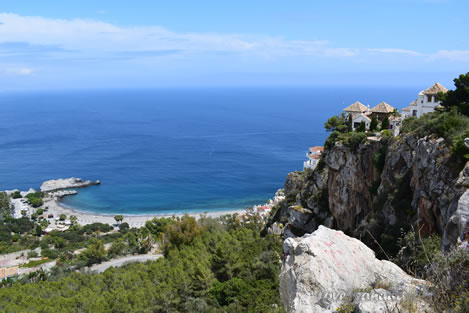 Granada is located at the foot of the Sierra Nevada mountains, a National Park designated Biosphere Reserve by UNESCO in 1986.

The River Darro flow through the old town, dividing the hills of Sacromonte and Albaycin, that of the Alhambra.

The main rivers of Granada are the Genil, Trevélez and Poqueira.

The coast of Granada is called Costa Tropical and its main municipalities are Almuñécar, Salobreña and Motril.

You can explore the city on a comprehensive Free Walking Tour of Granada. At the end, you'll be expected to tip the guide based on your own judgment of the value of the tour. 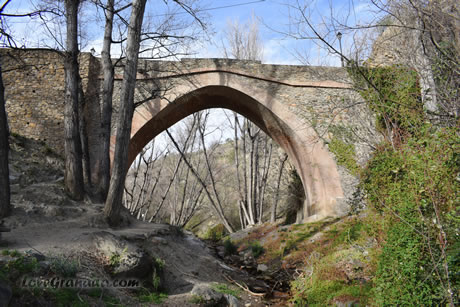 1. Granada was under Islamic rule for more than 700 hundred years (from 711 to 1492), much longer than any other place in the Iberian Peninsula and Europe.

2. In 1330 Granada was the most populated city of Europe. It had two big mosques (a major one in the Alhambra and another one in the city).

3. Temperatures could be very low in the winter (dropping to just above freezing at night) and very hot in the summer (reaching 40 degrees Celsius most days). Sometimes it snows in the city. 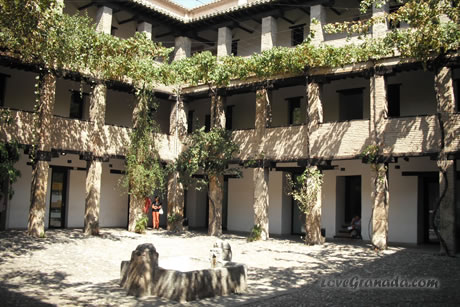 4. In Granada you will see the best preserved medieval alhóndiga (a warehouse for goods and a shelter for merchants) in Spain (photo).

5. The Alhambra is one of the most visited monuments in Europe with almost 3 million visitors a year. It is the only monument of its kind in the world.

6. Granada's average height is 738 meters above sea level. The Mediterranean Sea is just a 45 mins drive from Granada and Sierra Nevada ski resort is 35 km away. 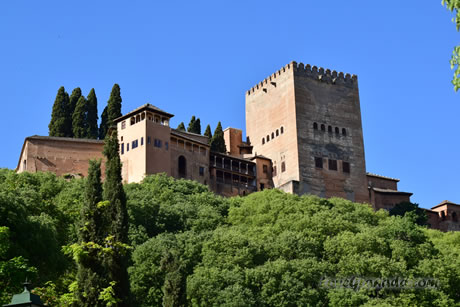 7. The Catholic Monarchs, the first monarchs of Spain, are buried in Granada's Royal Chapel.

8. If you are lucky, you can ski and swim on the same day in springtime in Granada.

9. Sierra Nevada ski resort is the southernmost in Europe. It is well known for having the longest skiing season in Spain and many more sunny days than any other one.

10. In Sierra Nevada you can ski wearing your swimming suit. Every year a 'Skiing in Swimming Suit Day' is held at the end of the season. 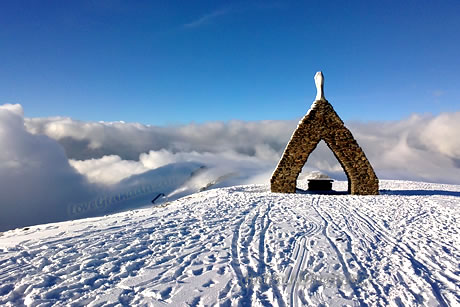 11. Mulhacén peak (3482 high) is considered the roof of the Iberian Peninsula. There are 29 peaks over 3000 meters high in Sierra Nevada.

12. Granada is famous because of its tapas.

It is the only place in Spain, together with Almería, where drinks come always with free food. 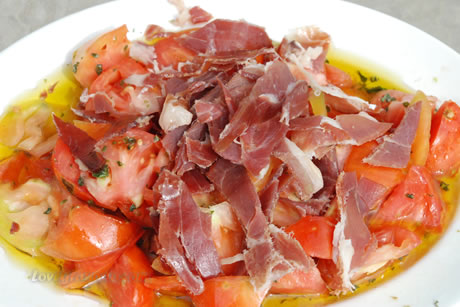 It does not matter which size you ask for, tapas will be the same size always.

14. Granada is surrounded by mountains. Almost at the end of every street you will see one, and they turn white during the winter.

Most restaurants are usually not open until 20:00. 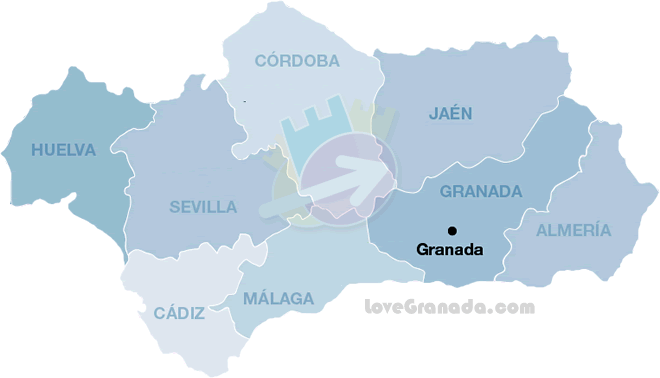 Granada's airport is 15 km away from the city on the road to Malaga.

Sierra Nevada is 30 km away and Granada tropical coast is 65 km away from the city. 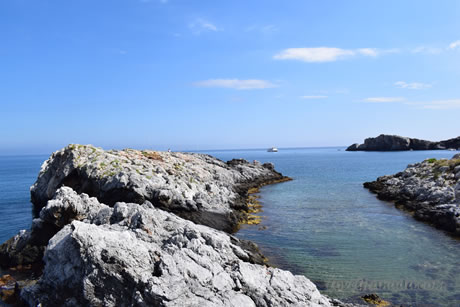 Granada region's climate and landscape is one of the richest in Spain.

It ranges from the alpine vegetation and weather of Sierra Nevada to the tropical coast of Motril, where winter temperatures average is 15 degrees Celsius.

Perhaps no other region on the Iberian peninsula has such a contrasting and manifold variety, unfolding at the foot of snow-topped mountains. 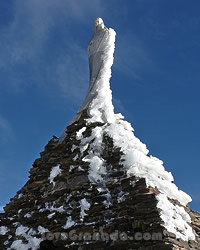 ☆ Albaicin and Sacromonte Guided Tour: discover this old arab quarter of Granada with this guided tour.
Granada offers some of Europe's highest mountains, being Sierra Nevada the principal mountain range. It has more than 20 peaks over 3000 metres above sea level and they are snow covered most of the year. They reach their maximum altitude in Mulhacen (3,481 m), Veleta (3,470 m) and Alcazaba (3,314 m).

Granada has a Mediterranean mountain climate with low humidity and high temperatures in the summer.

The most stable temperatures are during spring and autumn, which are the best times of the year to visit the city. 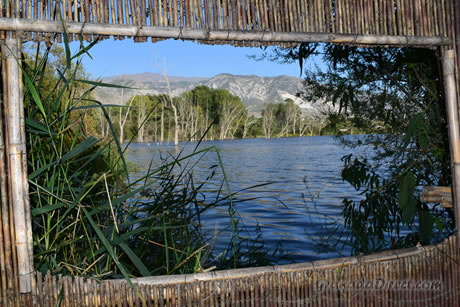 Animal life is diverse due to the varied habitats.

Wolves, foxes, and large predators such as royal eagles, vultures and hawks exist in mountainous parts.

Best Time of the Year to Visit Granada 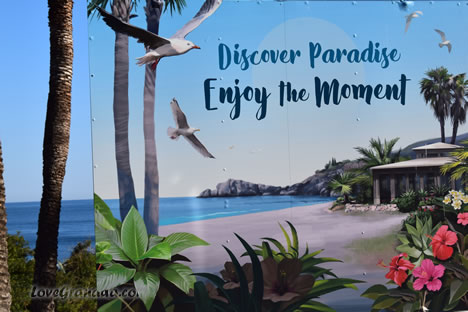 Granada is ideal for visiting all year round.

In winter, the arrival of snow in the Sierra Nevada leaves a most beautiful mark on Granada. It is then that winter sports are practised in the ski resorts. 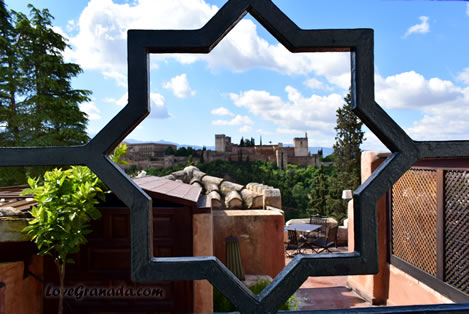 They are closed on Sundays and holidays. Small shops and local bussinesses close on Saturday afternoon too.

There are special opening times during Christmas and local festivities, such as feria and Easter.

Bars and restaurants serving food and tapas open around 1 p.m. and close about 4 p.m. Evening opening times are about 8 p.m. and closing time is between 11.30 p.m. and midnight. 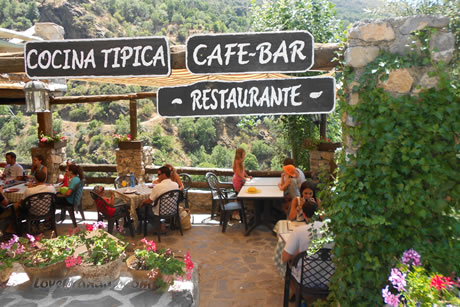 Bars serve tapas while the kitchen is open, more or less within the above hours. Cafeterias or bars serving breakfast open very early, some even before 7 a.m. and others a little later.

Do People Leave Tips in Granada?

In Granada, service is already included in the bill, so tips are not expected. 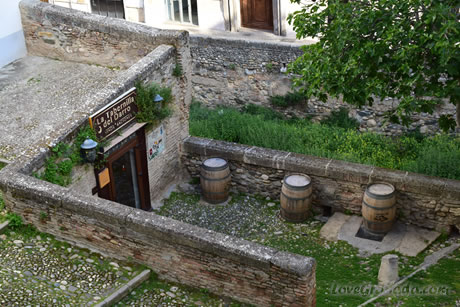 However, you may wish to leave something if you are happy with the service. People sometimes leave loose change.

Related information in Eating Out.

Is Smoking Allowed at Restaurants and other Public Places?

Smoking is not allowed in public establishments, buses, trains, etc.. in Spain. Usually bars and restaurants have an outdoor area where smoking is allowed.

To see a map of each route and bus stops, frequency, schedules, visit Granada Buses. 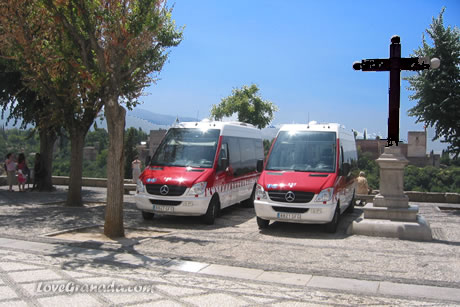 Here you can find out about timetables, journeys, fares and any other information on Granada's urban bus network.

There is a bus pass called CrediBus which the visitor can use when travelling by bus in Granada.

From here you can get bus maps, collect lost property found on Granada's buses, make comments, suggestions or complaints on transport services, request a youth pass or recharge your ticket. 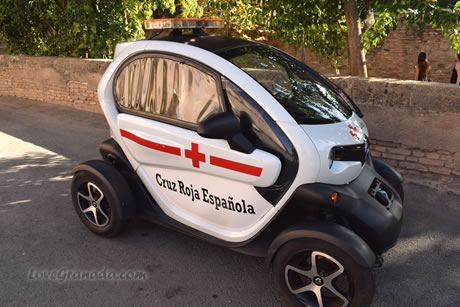 Anyone from the European Union visiting Granada receives free medical treatment, providing they have form E-111/128 with them.

Visitors from beyond the European Union are advised to obtain travel insurance before leaving their country. 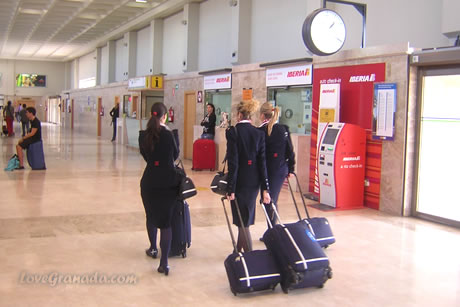 How to Reach Granada from the Airport?

There is a bus service from the airport to central Granada.

The journey lasts around 50 minutes depending on the time of day, since traffic levels vary and the bus makes several stops in the city centre.

You can also reach the centre of Granada from the airport by taxi, which costs 25-35 euros.

There are also serveral parkings in and near the airport.

© Copyright • LoveGranada.com • Any use of the content, including copying of it in whole or in part is prohibited.
Opinions about Granada, Spain
I fell in love with the city

What a charming city, full of cultural interest, monuments of Baroque and Renaissance styles, its tapas bars... I would love to live here, I fell in love with the city (Maria).
A feast for our eyes

Granada is an incredible city. Walk along the Carrera del Darro, full of picturesque places, always accompanied by the freshness of the river.

The Alhambra, high up the hill, evokes melancholy and romanticism and dresses in a beautiful golden color with the evening light. A feast for our eyes! I want to come back!
How beautiful is Granada

I spent 15 days studying part of a master's degree in Granada, and I was delighted with this city that amazes by its charming center, its narrow streets and its architecture.

The Alhambra is a wonderful place, full of beautiful gardens and buildings. When I return to Spain I would love to go to Granada to remember the moments I spent there.
One of the most beautiful provinces

Granada is one of the most beautiful provinces I've seen. The monuments are beautiful. Its cuisine is very good, especially its tapas.

The Alhambra as a whole, the Generalife, the Sacromonte caves, the Albaicín neighborhood, the Cartuja Monastery, the Cathedral, etc ... They are beautiful.

Now in October I will go to the Alpujarras, I will visit Salobreña, Almuñécar, Motril, Loja, Guadix, Montefrio, Albolote, etc.
Really enjoyed the trip

I recently visited Granada, Cordoba and Malaga for 4 days and really enjoyed the trip. It was good to see various historical places which are well looked after. I wish I had more time but hopefully I will get another opportunity in the future. Make sure you get Granada card because it's really worth it (Az).

Alhambra Tickets
Where and how to buy tickets for the Alhambra and where to collect them, what to do if tickets are sold out.
Home » Granada City