The Alhambra in Granada - Essential Guide, Practical Information and Tips 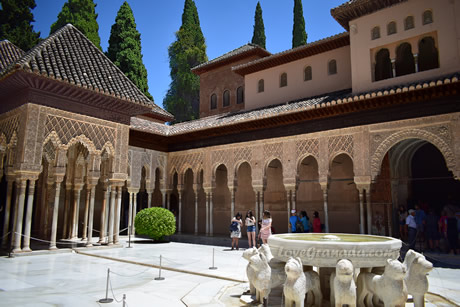 The Alhambra is a monumental complex made up of palaces, towers, gardens and aqueducts. It is a medieval walled city, residence of sultans and kings from the 13th to the 16th century. 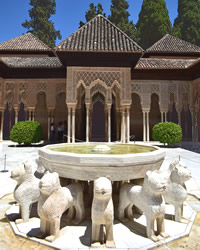 It was built between the XIII and the XIV centuries and was the capital of the Emirate of Granada, whose territories stretched from part of Córdoba, Sevilla, Jaén, Murcia and Cádiz, to the whole of Almería, Málaga and Granada.

The first Emir of the Alhambra was Muhammad I or Al-Ahmar, the founder of the Nasrid dynasty. 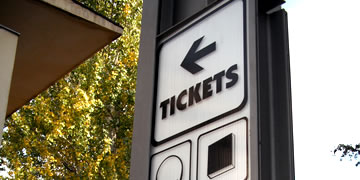 Where and how to buy tickets for the Alhambra Palace in Granada on the same day, in the ticket office, on the Internet or by telephone. 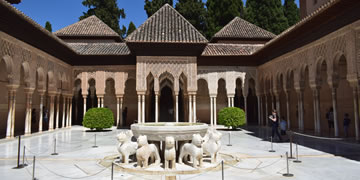 Guided visit of the Alhambra with an expert in a small group that includes the Nasrid Palaces, the Generalife and the Alcazaba. Discounts for children. 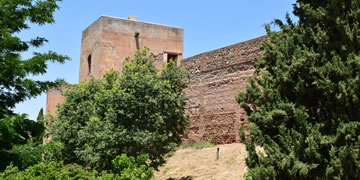 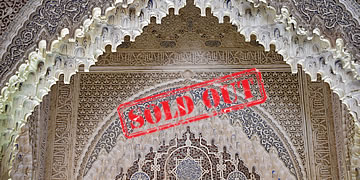 Wheat to do is when the tickets to the Alhambra are sold out, how to buy other types of entrance, release of tickets at midnight, pernocta card, etc. 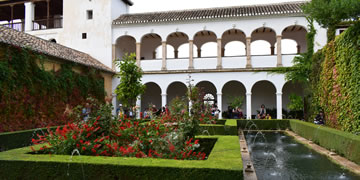 The Generalife were the gardens of the Arab architect, beautifully spacious Arab gardens next to the Alhambra on the hill Cerro del Sol. 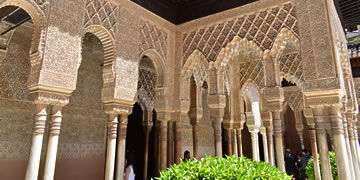 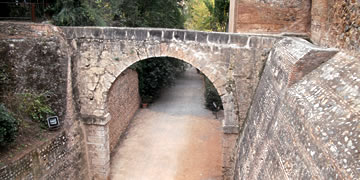 Admission prices of the Alhambra in Granada and advance tickets. Prices for adults and discounts for disabled people, pensioners and young people. 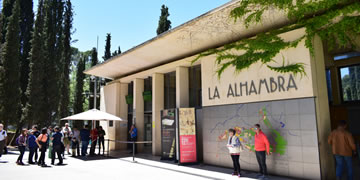 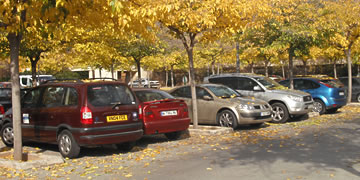 Information on Alhambra parking, parking prices, location maps, access points and how to get to the parking areas from Granada city centre.

How to Get to Alhambra 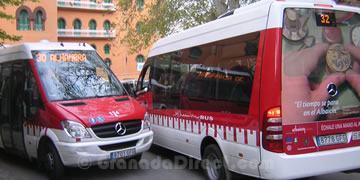 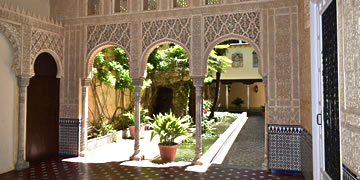 What to see in the Alhambra for free, a complex of palaces, gardens, towers, military buildings and gates which you can see without buying a ticket. 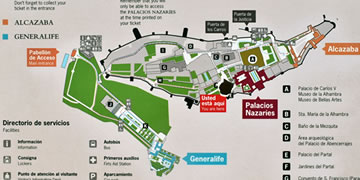 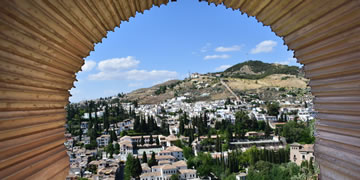 Images of the Patio of the Lions, Nasrid Palaces, the Torre de la Vela, the Palace of Carlos V, the Alcazaba, Generalife and the Comares Palace. 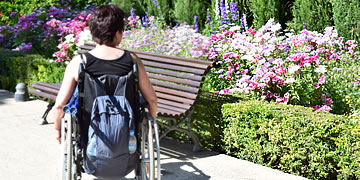 The areas of the Alhambra that are not accessible for disabled people because of the abrupt level changes, stairs, etc... Maps and tickets. 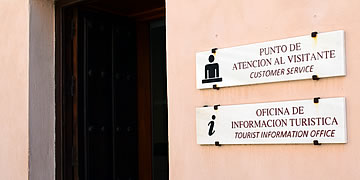 The phone numbers where you can reserve the Alhambra entrance, to buy Granada Card, get public transport and general information. 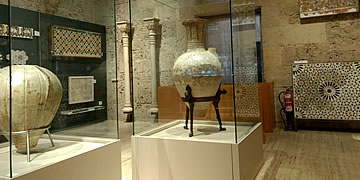 The best collection of the ancient Nasrid artwork, important representative pieces of the Alhambra, the domestic ceramics, architectural objects, etc.

The Alhambra and the Generalife are the main symbols of the splendour and power reached by the Nasrid dynasty, which founded the kingdom of Granada in 1246. 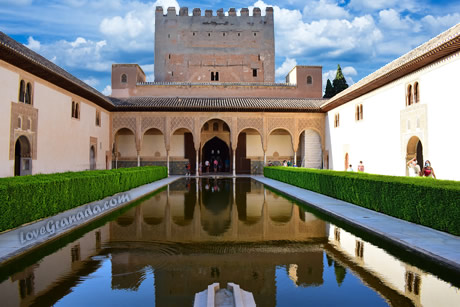 Its fall came on 2nd of January 1492 with the entry of the Catholic Monarchs into the city after a 10-year war.

Its unique location, with breathtaking views of Granada, the Albaicin and Sierra Nevada makes it an exceptional place.

The Alhambra is the most visited monument in Spain. About 3 million people visit the Alhambra and the Generalife every year. It became a Unesco World Heritage Site in 1984. 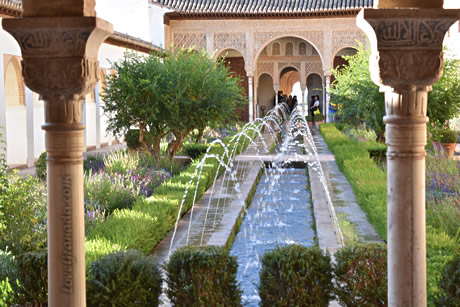 What Does the Alhambra Mean?

It is believed that the Alhambra has its origin in a simple fortress built on this hill in the ninth century which was called 'AlHamra' (the red one) because of the reddish color of the earth used in its construction.

What is the Alhambra?

The Alhambra is a medieval palatine city formed by palaces from different periods with its medina, gardens, irrigation ditches and protected by defensive structures composed of the citadel, watchtowers and walls. 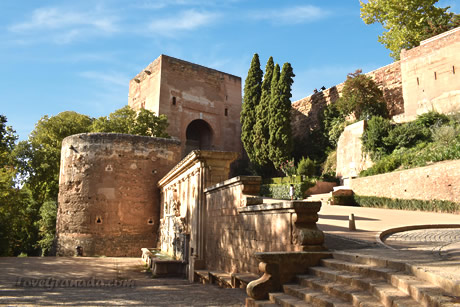 Who built the Alhambra?

A total of 22 emirs and sultans reigned in the Alhambra until the arrival of the Catholic Monarchs in 1492. Each of them added or modified something in the architecture of the Alhambra trying to leave their mark.

Numerous artists and craftsmen have been involved in the in the construction of this marvelous monument, a World Heritage Site. 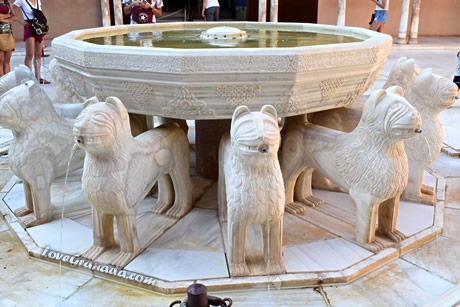 Muhammad I, known as Al-Ahmar, the founder of the Nasrid dynasty, began the construction of the Alhambra and moved to live here from the Albaicin in the first half of the 13th century.

Muhammad XII, known as Boabdil, was the last one.

The best extensions of the Alhambra took place during the reigns of Yusuf I and Muhammad V, the golden age of the kingdom of Granada, between 1333 and 1391.

Transformation of the Alhambra 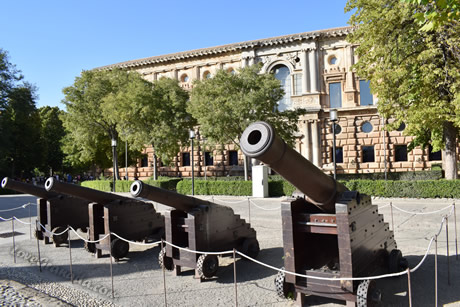 From this period date such important constructions as the Gate of Justice, the Throne Room of the Palace of Comares and the Palace and Court of the Lions.

The surrender of Granada to the Catholic Monarchs in 1492 marked the beginning of a period of transformation of the Alhambra.

The Catholic Monarchs made major modifications bringing late Gothic and Renaissance styles to their new residence. 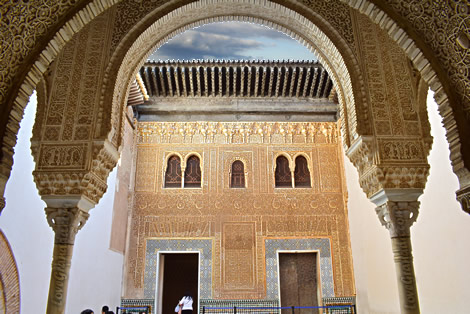 Later, their own grandson, Emperor Charles V, commissioned Pedro Machuca, a master of the Renaissance, to build an imposing palace in the very heart of the Alhambra.

Space of the Month

Each month the Council of the Alhambra chooses an area that is normally closed to the public, and opens its doors for visitors only during that period.

Be attentive when you make your visit and ask for the "Space of the Month". It is included in the general admission. 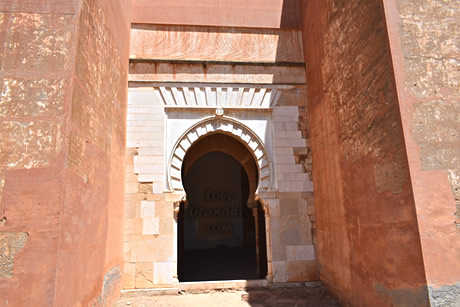 Recently, the restoration of the beautiful Oratory of the Partal Palace has been completed.

This magnificent work earned international recognition in the form of the European Heritage/Europa Nostra 2019 award.

The Alhambra monumental complex was declared a World Heritage Site by UNESCO in 1984 for its outstanding universal value.

© Copyright • LoveGranada.com • Any use of the content, including copying of it in whole or in part is prohibited.
Opinions about Alhambra in Granada
Astonishing place

Amazing, with its astonishing castle, fortress, palaces, beautiful rooms and gardens all in one, and views to the Albaycín, and the city of Granada.
A pure jewel

I loved Granada, the variety of its architecture, the beauty of the landscapes, the Sierra Nevada, the atmosphere in the streets, the alleyways of the Albaicin and the mountains and unforgettable view of the Alhambra ... a pure jewel.
Alhambra History

I would love to see Spain again most importantly Granada this time I will stay longer to get to know more. It was magnificent. I would like to know more about the history Moorish Kings and Queens who lived there? Why it was the palace was named Alhambra. My grandparents talked about Alhambra and I never get enough. Alhambra is our surname (Alhambra).
We were told on the day they couldn't get tickets!

I was on a tour of Andalusia last week with Newmarket travel U.K. with entrance to the Alhambra supposedly included. We were told on the day (Sunday) they couldn't get tickets! Our rep said all uk tour operators were being let down. I can't believe if the tickets had been purchased well in advance this wouldn't have happened. Has anyone else had this problem? (Dee)
Devastated visitor

Having paid 240 euro for a trip for my 80 year old husband and myself to visit the Alhambra and a tour of Granada we were really looking forward to it having last visited 35 years ago.

Things were going well until a woman took my husband's ticket which had passport number expirey date his date of birth even our country of origin and told him he was not allowed to enter.

I could go on my own but not him.
After pleading with this dreadful person and our tour guide we had to leave.
We were both devastated we had not on any occasion been told to take passports with us and this was the reason given.

At our ages we had to wait outside in temperature of 32% for over 3 hours for our transport back to our hotel.rnrnWe have wasted all that money as the tour company said it was not there fault the Alhambra are the problem.

Don't worry about pick pockets taking your passport (which you are told to be aware) just remember to take them with you in case you come across this miserable jobsworth!!!

Alhambra Tickets
Where and how to buy tickets for the Alhambra and where to collect them, what to do if tickets are sold out.
Home » Alhambra