Palaces and Areas of the Alhambra with Free Access, Without a Ticket 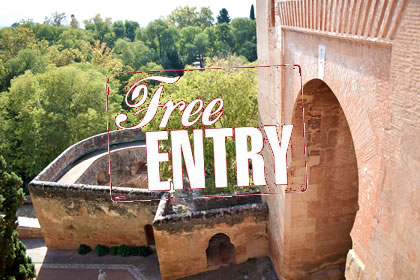 The Alhambra was a fortified city, a complex of palaces, towers, gardens and access gates. This is the reason why a big part of the Alhambra can be seen for free. 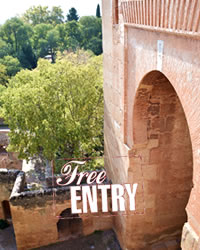 To visit the Nasrid palaces (the most beautiful and famous part), the Alcazaba (military buildings and towers) and the Generalife (palaces and gardens) you need to buy a ticket. 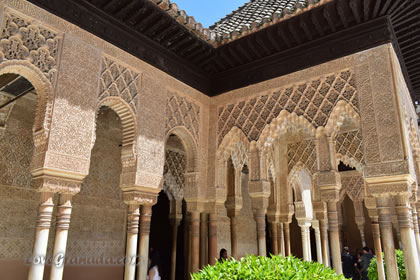 This is usually called the Alhambra palaces (photo). However, Alhambra tickets are quickly sold out.

In this section, you can learn about what to see in the Alhambra for free.

And don't underestimate it because it's free, there are very interesting places to be discovered. Find out where.

If you you'd like to see all main areas: the Nasrid Palaces, Alcazaba and Generalife and not miss a detail, you can choose a Alhambra Guided Tour.

You can explore the surroundings and see the Alhambra from a new perspective with the Open Air Tour, this guided tour includes free areas of the Alhambra.

If you walk from Plaza Nueva to Cuesta Gomérez you will find the impressive Puerta de las Granadas (Gate of the Pomegranates). This beautifully preserved medieval gate is the main access to the forest of the Alhambra. 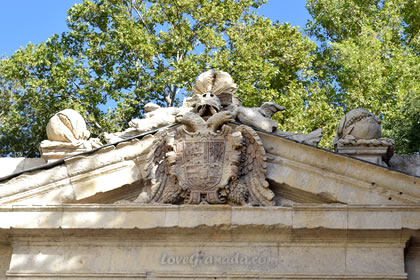 The Pomegranates Gate (photo) was built in 1536 to replace a previous gate called Bib-Albuxar (gate of the good news). Some remains of this door are still visible on the right side of the gate.

The pomegranate, the symbol of Granada, is represented in carvings in this gate, hence its name.

Right on the center you can see the Imperial coat of arms of Emperor Charles V, which is crowned by three grenades.

The gate consists of three arches: a central one for the cavalries; and two lateral ones for people. 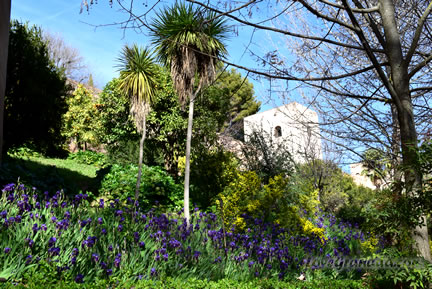 When you cross the gate you find yourself in the Alhambra forest (photo), which is surrounding the Alhambra Monuments complex.

From here three paths will lead you into the complex; the lateral ones are only for pedestrians.

They were designed in 1729, although its current configuration dates back to the 19th century.

Now we are in the old forest that extends throughout the Sabika hill. Right on the top of this hill the Alhambra was built. 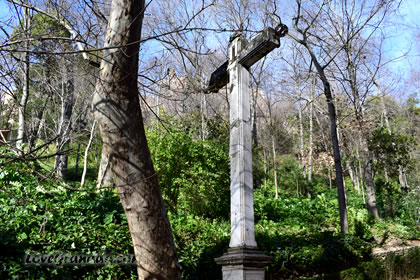 This beautiful forest was planted in the 17th century. Luckily, it has stood the test of time and heavy traffic. Now only authorized vehicles are allowed here.

This cool and peaceful place still retains its beauty thanks to the variety of species: mainly, chestnuts, poplars, elms and laurels.

The Fountain of the Gate of the Pomegranates (17th century) and the cross of the gunner Leandro de Palencia (photo), a former blacksmith of the Alhambra, welcome the visitor.

This fountain was built to replace an older one, the same as the Gate.

The Fountain of Charles V 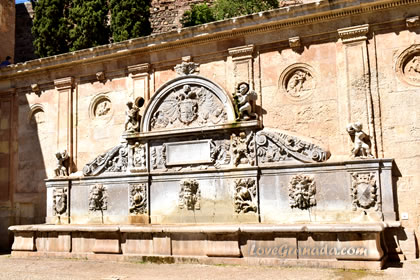 If we follow the pedestrian path on the left, we will reach the magnificent Fountain of Charles V (photo), a masterpiece of the Spanish Renaissance.

In this monumental fountain we can see three big spouts representing the three rivers of Granada: Beyro, Darro and Genil.

Take your time and admire every detail of this marvelous work of art. Once again, right at the top of the fountain, we will find the imperial coat of arms of Charles V.

The Gate of Justice 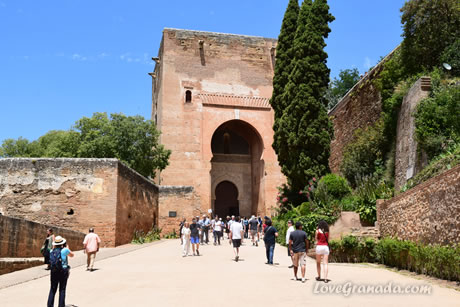 If you pass the fountain and walk up the stairs, turning to the left, you will find the marvelous Gate of Justice.

This is one of the four outer gates that grant access to the walled complex of the Alhambra, and certainly the most impressive and renowned one. It was built in 1348, during the reign of Yusuf I.

It has two arches, in the outer one you will see a hand carved in stone. 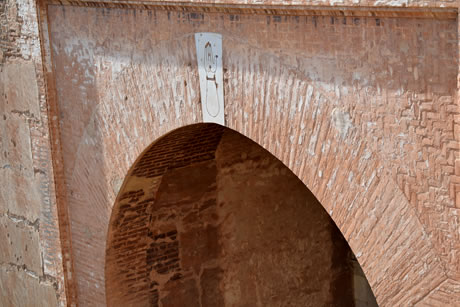 It is the Hand of Fatima or Khamsah, whose five fingers represent the fundamental principles of Islam: divine unity, prayer, alms, fasting and Pilgrimage to the Mecca. This Islamic symbol is also used for protection.

In the center of the inner arch, you will see a key, which is believed to represent the power that God granted to the Prophet Mohammed to open and close the doors of Heaven.

We cross this wonderful gate that grants access to the medieval city of the Alhambra. 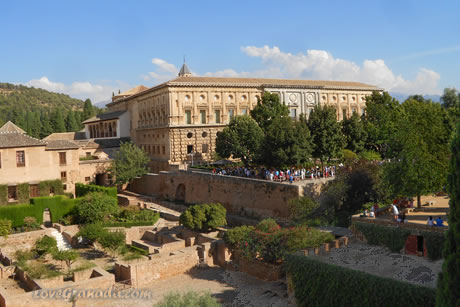 The first thing we find is a large central square called Plaza de Los Aljibes. It was a transit place between the military area and the palaces of the Alhambra.

Today it looks very different from the original square. In the Nasrid period there used to be a significant difference in height here, so the new inhabitants of the Alhambra took advantage of it building a large tank for storing water in 1494.

This is called aljibe, hence the name of the place. 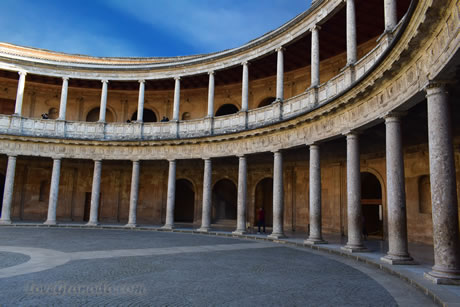 The complex consists of two naves covered with barrel vaults and there is another water tank at the north end of the square.

With the construction of the Palace of Charles V (photo) this area was expanded and a piece of the southern wall was demolished.

Currently, this square is the point of entry to the Alcazaba and Torre de la Vela (literally Candle Tower).

It could be a good place to stop and take a break in your visit. Enjoy the beautiful views of the Albaycín.

The Gate of Wine 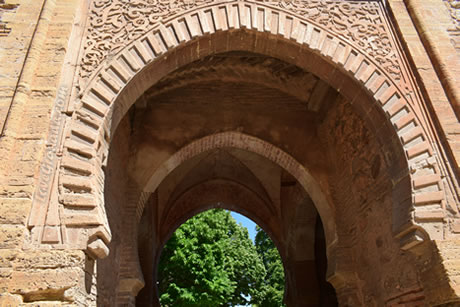 Coming back, on the right, we find the beautiful Gate of Wine (photo), which was the main entrance to the medina or city of the Alhambra. We cross it.

You will notice that, unlike the outer gates, this is not built in a L-shaped pattern and it grants direct access to the artisans and workers district.

However, there are benches inside for the guards that controlled the passage.

This gate is one of the oldest buildings in the Alhambra, since it dates back to the reign of Muhammad III (1302-1309). However, the facades belong to a different time.

A good way to get to know the Alhambra, its history, palaces and gardens is by taking a tour. There are several interesting free and private tours offered by Civitatis:
Alhambra Guided Tour: Discover the incredible history and architecture of the impressive Alhambra, the Generalife and Nasrid Palaces with a passionate and experienced guide.
Alhambra Open Air Tour: See the Alhambra from a new perspective, visiting the surroundings of the beautiful Alhambra, free areas and gardens, the Palace of Charles V...

The Palace of Charles V and Museums 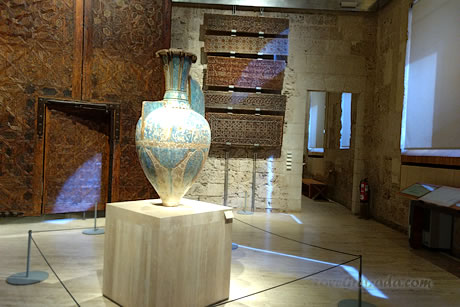 Crossing the Gate of Wine we find ourselves in front of the Palace of Charles V.

This exceptional building can be visited free of charge and you will find here two museums:

- the amazing Museum of the Alhambra (photo) and

- the Museum of Fine Arts (this one is free only for EU citizens).

You could spend here the rest of the day, but if you wish to continue exploring the treasures of the Alhambra, we recommend you to follow the street on the right side of the palace, the Calle Real (Royal Street) and visit the Church of Santa María de La Encarnación (photo). 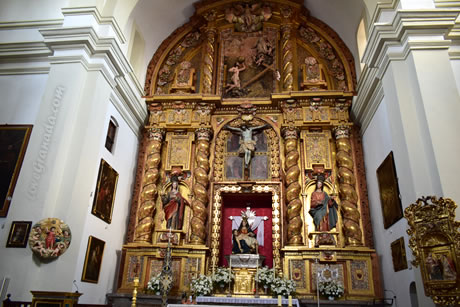 This 17th century church is replacing the Great Alhambra Mosque and was built here to represent the triumph of Christianity over Islam.

The image of Saint Mary of the Alhambra (by Torcuato Ruiz del Peral in 1750 – 1760) is venerated here and taken to Granada every Easter in a very popular procession (photo bellow next to the Gate of Bib-Rambla).

You do not need a ticket to visit this church.

If you continue walking this road you will reach the old Saint Francis Convent, turned into a luxury hotel today (National Heritage Paradores group, photo). 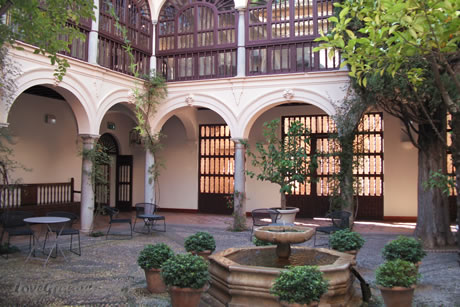 The Palace of Muhammad III (1303-1309) was standing here; however, it was given to the Franciscan order by the Catholic Monarchs. They wanted to build here the first convent of the city. It was finished in 1495.

In this convent, Queen Isabella was buried while the Royal Chapel (current burial place) was built.

Its main highlights: the viewpoint that remains from the Nasrid palace and the old chapel, where the Queen was buried.

Angel Barrios Museum and The Gate of the Carriages 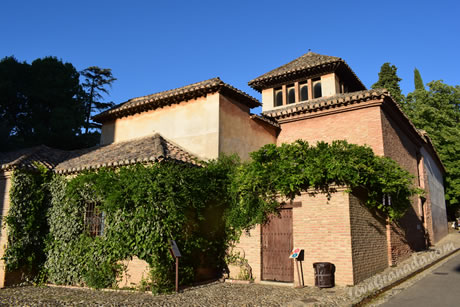 Returning now towards the Palace of Charles V, stop by the Angel Barrios Museum, a famous musician and composer from Granada.

This interesting building is located where the Bath of the Great Mosque of the Alhambra once stood. You can see the remains of it and a Nasrid house.

The Barrios family lived here and run a tavern called "El Polinario", which was the artistic name of the father. 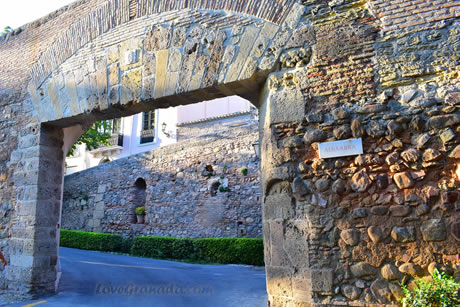 In fact, Antonio Barrios Tamayo was a relevant flamenco artist, who gathered in his tavern many popular artists, such as Sorolla, Zuloaga, Ravel and García Lorca.

We keep walking, now turning left and down to the forest. We will pass through the Gate of the Carriages (photo).

This gate was open in the wall between 1526 and 1536 with the sole purpose of facilitating the passage for the construction works in the Palace of Charles V. 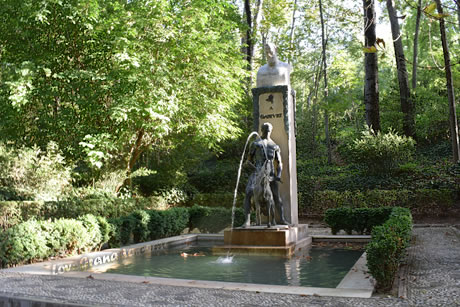 We are back to the same street we climbed before: Cuesta de Gomérez.

Here you will find the Monument to Ángel Ganivet, a writer and diplomat from Granada, a key figure in the Generation of 98.

If you walk further down you will find the marvelous Gate of Bib-Rambla (photo) from the Muslim-medieval era.

Originally it was located in the center of the Nasrid city, in the wall surrounding the medina. 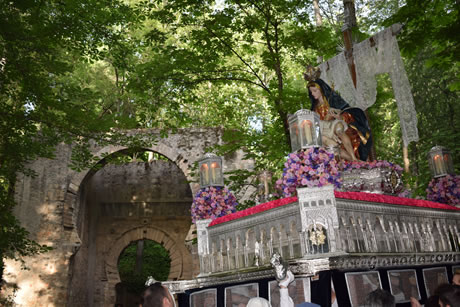 It used to grant access to the square named also Bib-Rambla until the end of the 19th century.

Although it was considered a National Monument, it was dismantled in 1894 and moved piece by piece first to the Archaeological Museum, and then here in 1933.

It was also known as the Arch of the Ears and Hands because the ears and hands of convicted offenders were exhibited here.

Turning left on this road, we will arrive at the Manuel de Falla Auditorium and the beautiful Carmen de los Mártires (photo). 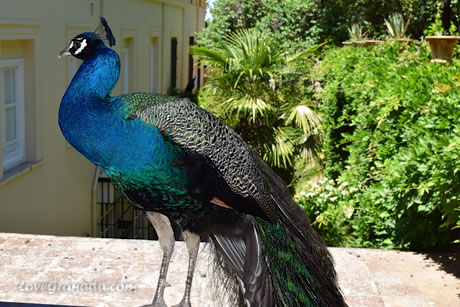 This place was a prison in the Nasrid period and was converted into a convent by the Catholic Monarchs.

Today it is a perfect example of the 19th century carmen from Granada, and its beautiful gardens offer amazing views of Granada.

The entrance to the Carmen de los Mártires is free.

Nearby, the Alhambra Palace Hotel has a terrace with panoramic views over the Realejo quarter. This is a great place to enjoy a magical sunset over Granada. 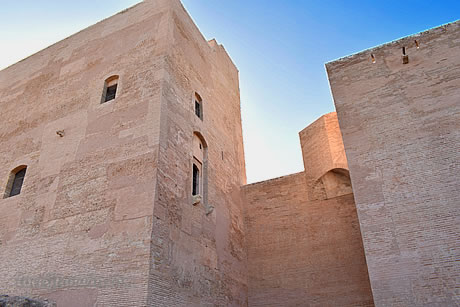 Facing this Hotel, take the main street on your right called Callejón Niño del Royo. You will pass the Rodríguez Acosta Foundation (photo) and at the bottom the Crimson Towers or Torres Bermejas.

These watchtowers were built in the 11th century on an earlier fortification to reinforce the walls.

It is believed that the three remaining towers were part of a group that belonged to the first Alcazaba of the Alhambra.

They were located in this strategic point to watch over the Vega of Granada. It was connected with the Alcazaba through a wall.

To see the rest of the Alhambra you have to buy a ticket.

It is good to visit the free areas on a separate day, there are plenty of things to see. And another day to visit the main sites: Palacios Nasrides, Generalife, Alcazaba, you need a ticket to enter them. If you have only one day in Granada, visit pay areas in the morning and free areas in the evening, after having lunch.

Alhambra Tickets
Where and how to buy tickets for the Alhambra and where to collect them, what to do if tickets are sold out.
Home » Alhambra » Alhambra Free Areas