The tourist train 'Granada city tour', also known as the Alhambra Train offers a tour to the most important areas of Granada: the Alhambra, the Albaicin, Plaza Nueva, etc.. 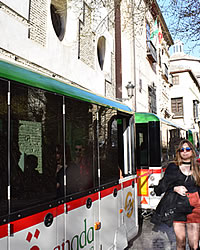 This train is specially designed to suit the characteristics of the city of Granada, it can pass through the narrow streets of the Albaycin and has a maximum speed of 25 km/h. 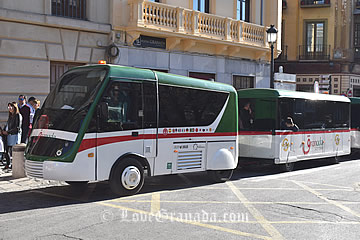 The Granada city tour train stops at the Alhambra, the Cathedral, etc ... but entrance to attractions is not included in the ticket price.

These trains are equipped with panoramic style roof and windows in the carriages to offer a better view of the city. They also have an audio system and TFT with information about the momuments and beauty spots along the route, as well as a space for people with disabilities.

This service is provided by the Joint Venture (JV) composed by Julia and Train Group Progresa SA. The trains have a capacity for 60 people.

The Itinerary of the Tourist Train of Granada

There are two routes: one daytime and one nighttime route. 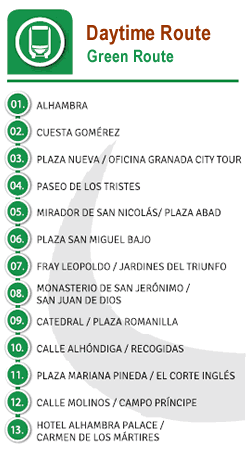 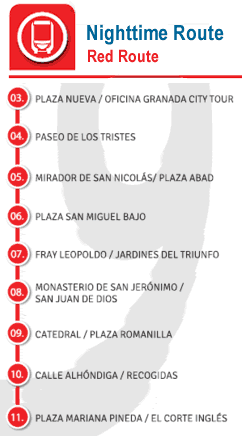 The daytime route has thirteen stops and is planned so that the tourists can visit the most important monuments of Granada.

There is one day tour and two day tour.

The price of the one day tour is 6 euros for adults. This eight-euro ticket allows you to get off at any train stop to visit the monuments (the entrances to the momuments are not included) and then get back on the train to continue the tour.

For 12 euros (for adults) you can use the tourist train for two consecutive days.

Those over 65 years pay 4 euros for a single trip and 6 euros to have unlimited travel for one day. Free for children up to eight years.

The tourist train is free for those with Granada City Pass.

The purchase of the ticket does not guarantee a seat. It may happen that the train is full and you will have to wait for the next one (or more) to be able to get on the train.

The daytime tour is 8.4 miles long and it takes about 1 hour and 20 minutes to complete the route.

The frequency is between 15 and 25 minutes depending on the season.

The night tour is 4 kilometers and takes about 40 minutes to complete the itinerary. The starting point is Plaza Nueva.

There is no night tour of Granada City Tour at Easter, January 5 and December 25.

This tour is offered by Julia Travel, LTD.

Is It Worthy to Use Granada Tourist Train?

The tourist train is similar to Granada bus tour, has audio guide, panoramic views, but has another route. If you want to see the city from the outside, maybe it's worth using it. 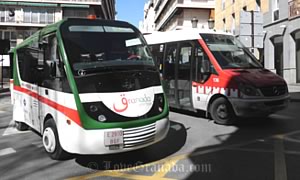 Because of its size the tourist bus cannot enter the Albaizyn (but passes through the Garcia Lorca Park, the Science Museum, etc..).

The tourist train enters the Albayzin and has a stop at the Viewing-point of San Nicolas from where you can get the best view of the Alhambra.

If you just want to see 2 or 3 monuments in one day, the Albaycin and the Alhambra, for example, and you are not interested in the rest of the monuments, and do not want to see exterior of Granada, it is better to take a normal city bus, comes cheaper.

Opinions about Granada Buses
Not that good experience
We have waited more than an hour to go on the train. The audio plug was broken so we used one. for most of the trip only music were on the audio and the information began at the end on the 11th stop we wouldn't recommend the train.
Our driver dumped us 2 stops short
Don't take the night tour and expect to go all the way round - our driver dumped us 2 stops short at 2245 because he was "contracted to do only these hours". He said another bus would come but it didn't and we were stranded not knowing how to get back to the start of the route (stop 3 at night) (Viviane).
Ticket sellers allowed people to jump the queue
We took the bus with carriages from the Alhambra, around the city and got off at Albaycin. The buses were clean, smooth and well driven, allowing passengers to see the tourist sites en route.

What let it all down were the ticket sellers at the Alhambra stop who took money, gave tickets but then when the bus arrived allowed people to jump the queue, and there was total chaos.

We waited 30 mins with many other people, were first in the queue but had to be very forceful to obtain a seat. We could see free seats but the ticket sellers and drivers wouldn't allow anyone on and had no sense of order.

It was most disappointing and it spoils what could be a good transport service and is done so well in other busier cities. (Margaret).
Another perspective to tour Granada
It is a good and quick way for the tourists to see Granada, also for the residents of Albaycin and people from Granada, now we have at our disposal another perspective to tour our beautiful city (Manuel).
Sponsored Links
Alhambra Tickets

Where and how to buy tickets for the Alhambra and where to collect them, what to do if tickets are sold out.
Home » Transport » Granada Tourist Train