There are city, intercity and suburban buses in Granada. Find out here how they work and which one will take you to the Alhambra, the airport or some touristic places outside the city. 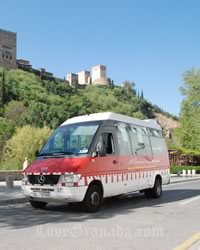 Information about Granada bus service: how to get around, pay for travel or plan a journey.

Services between Granada and nearby villages, metropolitan area buses that go to La Zubia, Alfacar, Santa Fe, Hetor Vega and other villages.

Buses between Granada and the Alpujarra. Where to buy tickets, routes and villages, bus stops, timetables, destinations and bus fares.

© Copyright • LoveGranada.com • Any use of the content, including copying of it in whole or in part is prohibited.
Opinions about Granada Buses
Granada City Buses

The buses throughout the city are regular and reliable.

If you are in a small group or plan on using several buses consider buying a 'Bono' which is a credit sized bus card you buy on board for 2 euros and top up with a minimum of 5 euros - it reduces the cost of a bus jou
ey to just over half price and 1 card can be used for several people.

Also if you use a second bus within 45 mins you don't get charged the second time (Jacqui).

Alhambra Tickets
Where and how to buy tickets for the Alhambra and where to collect them, what to do if tickets are sold out.
Home » Granada Transport » Granada Buses