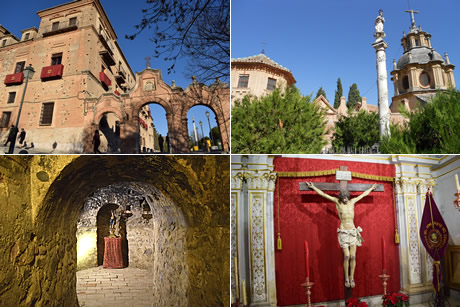 The Sacromonte is one of the mystical districts in Granada. Walking up the Camino del Sacromonte, from the Cuesta del Chapiz, you will see a large stone cross, next to the chapel of the Santo Sepulcro. 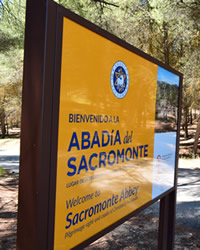 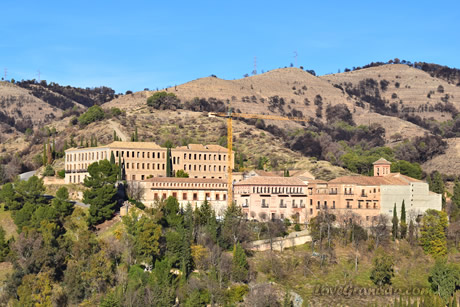 The complex has three main parts: the Abbey made in Seventeenth and Eighteenth centuries, the College of the Seventeenth Century and the Seminary.

Crossing the courtyard with 28 arches we enter a chapel which has a small altar by the entrance, leading to several caves in which were found a number of relics and texts from the Sixteenth Century.

A cross that is believed to have belonged to St. John of God is located in the main cave at the site where the holy men were burned. Opposite the entrance to the caves is a beautiful Madonna which was donated by Don Pedro Pascasio.

At the entrance to the street that leads to the Sacromonte Abbey is the Hermitage of the Holy Sepulchre, built in the Seventeenth Century.

Sacromonte Abbey has breathtaking views of the the Alhambra, el Albaicin, del river Darro and the magnificent peaks of the Sierra Nevada. How to Get to Sacromonte Abbey

You can reach the Sacromonte Abbey from Plaza Nueva by bus number C34. The buses have an average frequency of 20 minutes. Duration of the trip is about 15 mins.

You can not go to the Sacromonte Abbey through Sacromonte Road by car. But you can go up the Caretera de Murcia -> Camino Viejo de Fargue.

Taxis are allowed to ascend the Camino de Sacromonte, it takes about 10 mins from Plaza Nueva and will cost 5-7 euros.

© Copyright • LoveGranada.com • Any use of the content, including copying of it in whole or in part is prohibited.
Opinions about Sacromonte Abbey in Granada
Nice place, book in advance

This is one of very few places in Granada that requires pre-booking as you cannot visit it without a guided tour, so book first because places are limited. Normally you can book for the next day but do it earlier just in case.

The guided tour costs 5 euros. The tour includes the church, the small museum and the caves. The guide is in Spanish and in English. If you have a Granada Card the tour will be free.
Beautiful abbey with the fantastic views

The Abadia is beautiful in a lovely setting, up the hill with the fantastic views of Granada and the Alhambra. You can take a bus in Plaza Nueva, it will take you directly to the Sacromonte Abbey.

If you are fit you can walk but it is a very steep climb, probably not a good idea in July or August.
If you walk, you will pass by the caves where the gypsies still live now.

The abbey was the first private university of Spain. The caves are cool and peaceful; there is a small museum and beautiful church.

Unfortunately several parts of the building are not repaired and are falling apart after fire some years ago, but they are only visible from the top of the hill.

Alhambra Tickets
Where and how to buy tickets for the Alhambra and where to collect them, what to do if tickets are sold out.
Home » Granada Monuments » Sacromonte Abbey