Santo Domingo Church has several styles: Baroque, Gothic and late Renaissance. It was part of the Monastery of Santa Cruz, begun in 1512 in the Gothic style, to which relate its bows and wineries, while the rest of its decorations are Roman. 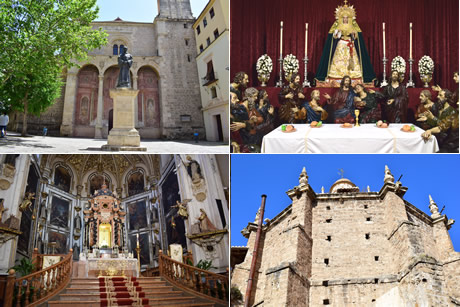 The building of the church was interrupted on completion of its shell and resumed years later in 1532. It is not known who was the architect or the director of construction.

In front of the church entrance there is a stone portico with three arches on its Doric columns with the initials of Ferdinand and Isabella, their shield, the Emperor, and the motto "Tanto monta" in the centre.

Above the porch is a window with two arches, separated by a columella, decorated with the sculptures of Ferdinand and Isabella's victories.

To the right, near the bell tower and joined to the main entrance, the Convent was built.

The Church of Santo Domingo of Granada is open during prayers. From Monday to Friday: 18:30-20:00 h. Saturdays and Sundays for liturgical celebrations.

Location and How to Get to Santo Domingo Church

A pretty small active church Located in Plaza Santo Domingo. The interior is decorated in Baroque and Gothic styles and has several side altars and beautiful paintings. Open only before Mass at 9, check the mass schedule.

In front of the church you can find the statue of Dominican priest Fray Luis de Granada.
Beautifiul portico and life size carving

The impressive the 16th Century building with an original facade, arched columns, the shields of the Catholic Kings Ferdinand and Isabella and frescoes decorating the portico.

Life size carving of the Last Supper on the right as you enter is remarkable. This church was part of the Santa Cruz Monastery. Located in the old Jewish neighbourhood of Realejo. Worth a quick visit.
Sponsored Links
Alhambra Tickets

Where and how to buy tickets for the Alhambra and where to collect them, what to do if tickets are sold out.
Home » Granada Monuments » Santo Domingo Church in Granada