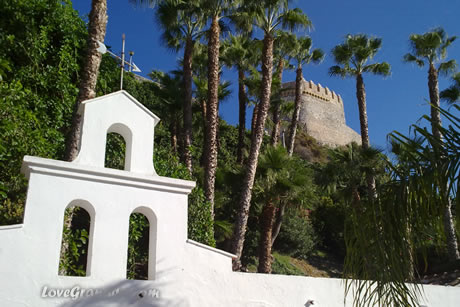 There are emblematic places in Almuñécar where you can discover historical roots and culture of this millenary town. 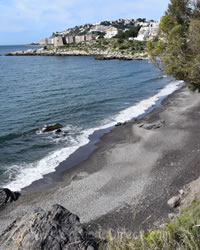 Here we selected the most beautiful and interesting places you should see and do on your visit to Almuñécar. 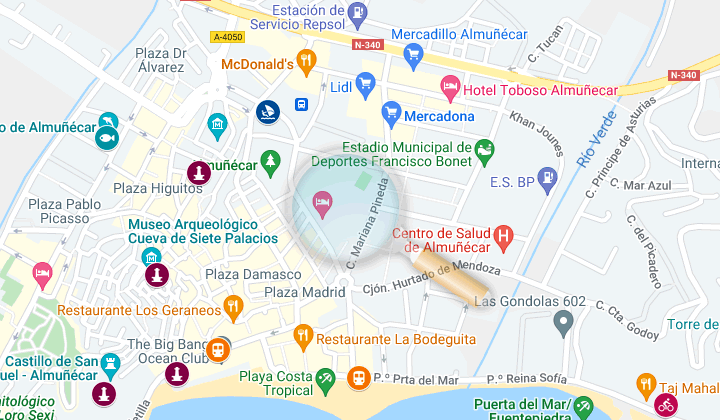 You will discover interesting proposals that will surprise you, such as the aquarium, the ornithological park or the cultural activities of the Majuelo park.

The Castle of San Miguel is an ancient Roman fortress, which also had a great importance in the Nasrid era in the thirteenth century. 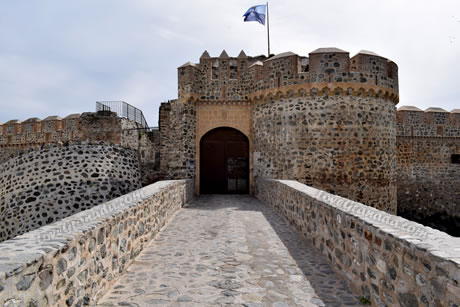 It was rebuilt by Ferdinand the Catholic and in the time of Charles V, when the four circular towers where added.

Bombed by the English in the War of Independence against the French, the castle remained in ruins and was converted into a cemetery in the nineteenth century.

Free guided tours from Tuesdays to Saturdays at 11:00 and 19:00 give you the opportunity to get to know this fascinating story hiding within its walls. Must see in Almuñecar. 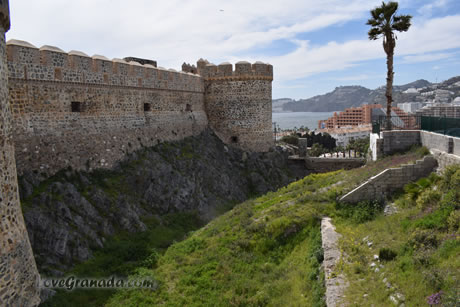 Admission costs 2.35 euros (adults) and 1.60 euros (children and pensioners) and includes the visit to the Archaeological Museum.

The Archaeological Museum is located in the crypt of an ancient Roman temple built in honour of Minerva around the first century BC, and consists of seven vaulted sections, hence its name (Cave of the Seven Palaces). 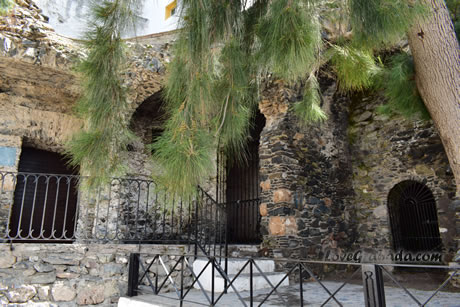 This museum contains numerous archaeological remains found in the Majuelo Park, as well as others found in the Phoenician-Punic Necropolis of Laurita and Puente de Noy, near the beach of San Cristóbal.

However, there is one piece of exceptional importance which stands out above all the rest: the Egyptian Amphora that belonged to Pharaoh Apophis I (sixteenth century BC).

One of the theories that are mooted says that this object was brought by the Phoenicians a thousand years after its manufacture. 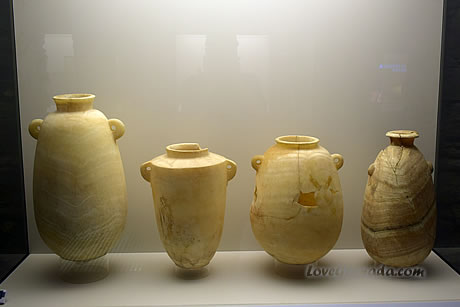 Other objects of interest are a fragment of a statue of the Goddess Minerva and remains of grave finds. 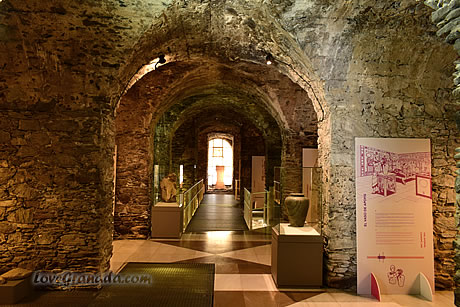 The Archaeological Museum is Closed on Mondays. 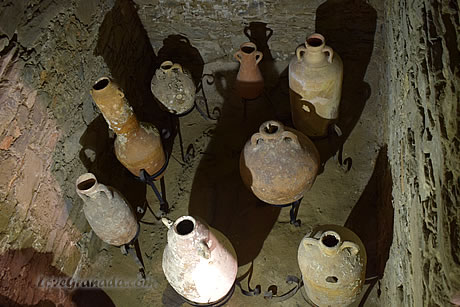 It's not possible to purchase a single ticket to the museum.

You have to buy combined visit to the Archaeological Museum and the San Miguel Castle. But both are worth visiting and its cheap. 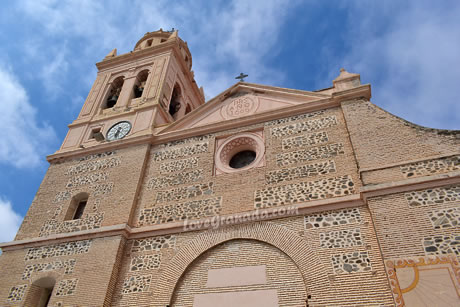 The church was designed by Juan de Herrera, although its tower was built by the Granada artist Diego de Siloé.

It was completed at the beginning of the seventeenth century, thus being the first Baroque temple in the province.

On the main altar there is a Visigothic sculpture representing the Virgin of Antiquity, patron saint of Almuñécar. 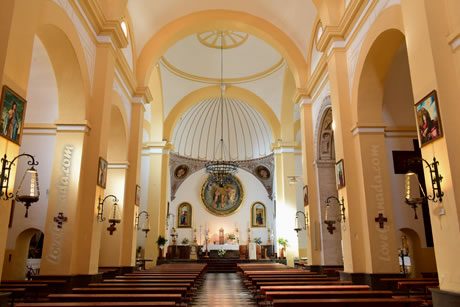 The church may be visited during hours of worship and there is no entrance fee.

It was probably built in the first century AD, with a length of 7 km, of which five sections are preserved. 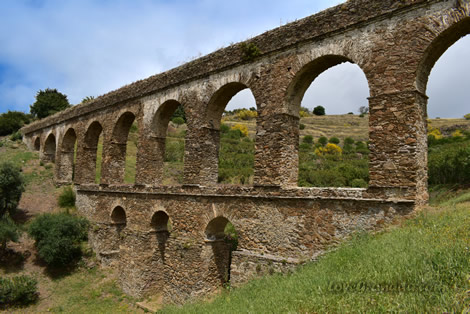 The last section was discovered at the end of the 1990s, during some works in the Plaza Mayor, and it is believed that underneath it passed a Roman road that went from Linares to Málaga.

Here, too, hot springs from the same period were found. The aqueduct has been declared an Asset of Cultural Interest and some of its sections are still used today in traditional irrigation.

It is located towards the C/ Suspiro del Moro and there is free entry. 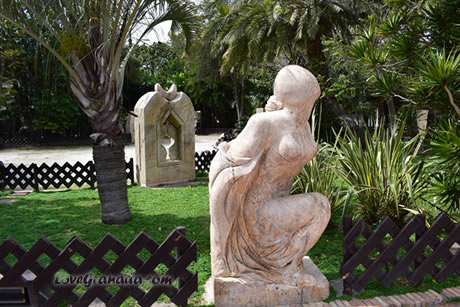 In the historical town centre, a relaxed stroll through the park will allow you to appreciate the archaeological wealth of Almuñécar, since the remains of an old fish salting factory are preserved here, a flourishing activity in Almuñécar in Phoenician and Roman times.

In this park you will find a magnificent collection of subtropical plants from all over the world. These plants were imported from Central and South America, Africa, the Philippines and New Zealand. 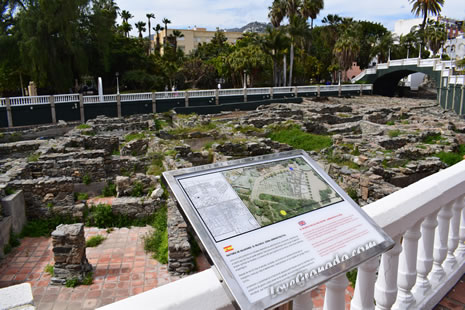 In addition, in summer after sunset, it becomes the cultural and leisure centre of the town, since many concerts and leisure activities are held here.

The Majuelo Botanical Park is located about half way between the castle and the Town Hall. Address: Avda. Europa s/n.

Located on the beach of Velilla, this 35,000 m2 water park stands out as the only one offering all the leisure activities of a water park, but with sea water. 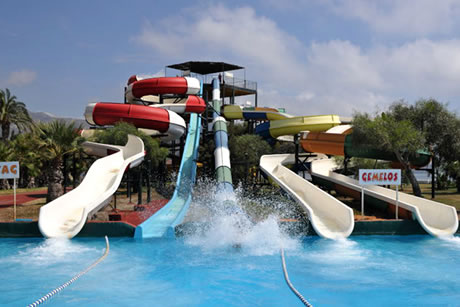 If you get hungry there are several food stalls in the park, food and drinks are reasonably priced.

You can also bring your own food, or you can leave the park and have lunch outside and then come back. 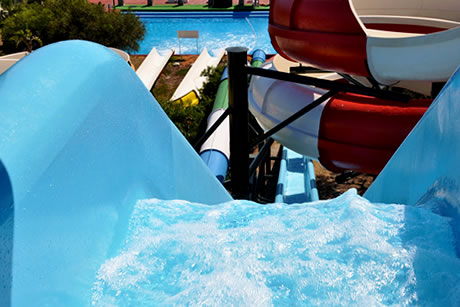 Entry is 21 euros for adults and 15 euros for children under 12 years.

The entrance fee is reduced if you enter after 15:00. It has private parking for clients at 5 euros for the whole day.

You need to pay extra for inflatables and your beds: dinghies 8 euros for the whole day, sun loungers 3 euros. Lockers 4 euros.

It is located on the slopes of San Miguel Castle, very close to the Peñón del Santo and the Majuelo Park. The LoroSexi Ornithological Park is a landmark on the Costa Tropical and receives some 30,000 visitors a year.

Here you can see about 100 different species of exotic birds: parrots, toucans, cockatoos, macaws, swans and peacocks, among many others.

Along the way you will enjoy beautiful views of the sea, as it is next to the beach of San Cristóbal.

Admission costs 4 euros for adults and 2 euros for children. Open in the months of July and August.

A fun option for entertainment during the holidays. 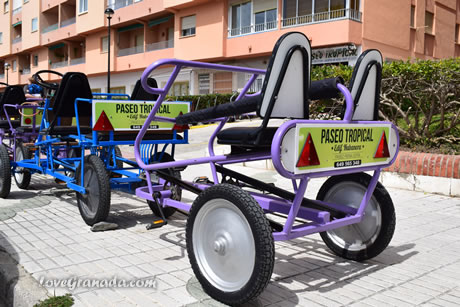 Along the Tropical Walk (Paseo Tropical), you can rent bicycles and pedal cars for two or more people and tour the promenade enjoying the morning or admiring a beautiful sunset.

It is advisable to avoid any kind of physical activity during the hottest hours of the day. 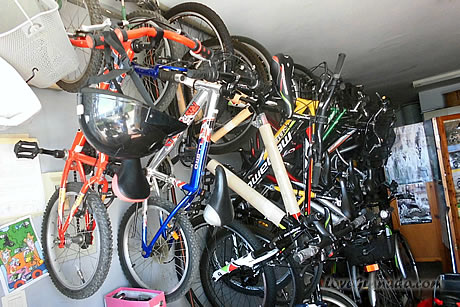 If rental is for only half an hour, prices are 20% lower.

ID must be presented and you must be of legal age.

The Tropical Walk is open in July and August, during some festivals and bank holidays.

In the Aquarium of Almuñécar you will learn about ecosystems and the marine fauna of this part of the Mediterranean. 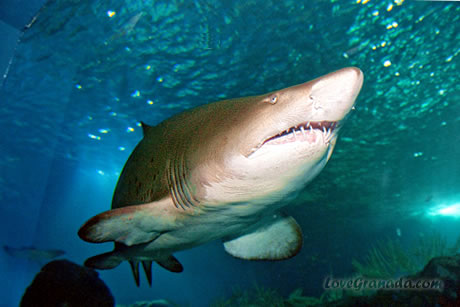 Recently reformed with the help of the City Council, the Aquarium has reopened its doors with 125 different species, among which are corvinas, moray eels, groupers, jellyfish and seahorses.

The attraction that attracts most interest is a panoramic tunnel that passes under the largest oceanarium in Andalusía, with a million litres of water, which is home to some very special tenants: sharks, among which is the bull shark. 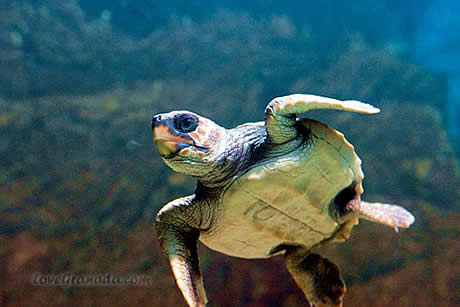 Admission costs 12 euros for adults and 9 euros for children. 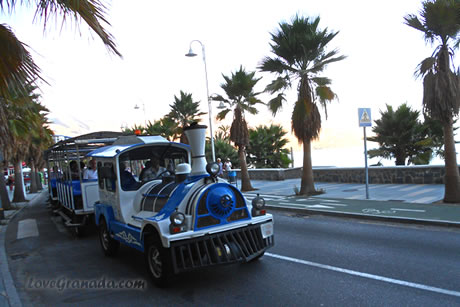 This small open-air city tour train will give you the chance to see what the town has to offer. It is also fun for children.

The first stop is Paseo del Altillo near the information point and terminates at the end of the beach of San Cristóbal. 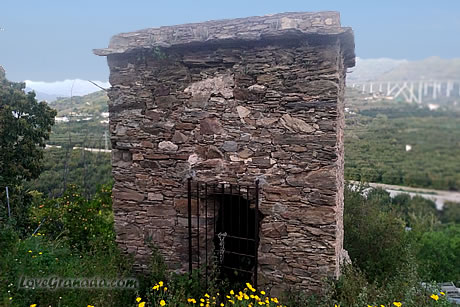 A columbarium in the form of a small tower that probably belonged to a Roman family residing in this area.

It is covered by a barrel vault and in its interior are rows of niches formed by small stones.

Located 2 km from the city, on the road that runs through the Rio Verde Valley, it also dates back to the period of maximum urban development in the Roman era of Almuñécar, between the first and second centuries AD. 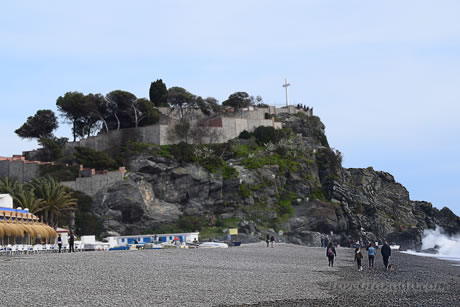 This symbolic place in Almuñécar, known as the Peñón del Santo, is a rocky outcrop by the sea crowned by a cross from which you can gain a unique panoramic view of two beaches.

It is believed that this rock was once connected to the castle, as evidenced by the remains of the walls.

At the foot you can see the monument to Abderramán l, an important Umayyad prince who landed on the shores of Almuñécar in 755 to proceed to Córdoba and founded an independent emirate there.

Monument to the Phoenicians

Located on the Paseo del Altillo, near the Peñon del Santo, it is a tribute to the first settlers of Almuñécar, the Phoenicians. It is made of bronze and is the work of the Granada sculptor and goldsmith Miguel Moreno.

Other Activities on Offer in Almuñécar 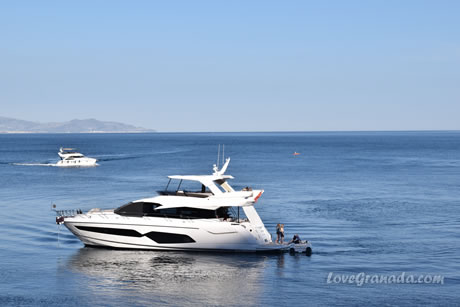 La Herradura, the best place to dive in the province of Granada, has impressive cliffs and caves. There are several diving centres.

© Copyright • LoveGranada.com • Any use of the content, including copying of it in whole or in part is prohibited.
Opinions about What to See in Almuñecar
No reviews yet.

Alhambra Tickets
Where and how to buy tickets for the Alhambra and where to collect them, what to do if tickets are sold out.
Home » Costa Tropical » Almuñecar » What to See in Almuñecar