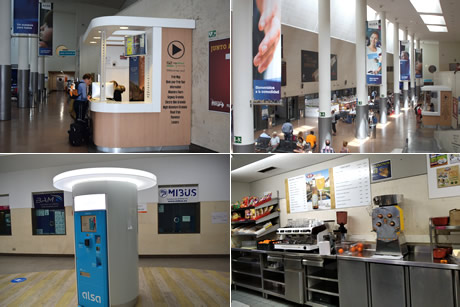 The Granada bus station is located on the outskirts of Granada. It offers tourist information to travelers, car rentals, lockers, restaurant and cafe. 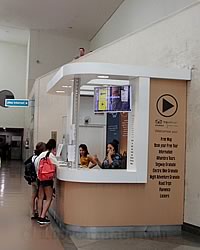 From the station you can take a bus or a taxi to Granada center or to the airport of Granada. You can also buy tickets at the station. 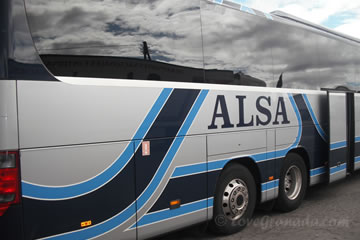 The only company that operates in Granada Bus Station is Alsa.

This company is owned by National Express (UK), covers the main routes from Granada to other cities, Granada province routes and also linking Granada with the rest of Andalusia and Spain.

Alsa offers services to cities such as: A Coruna, Barcelona, Bilbao, Madrid, Malaga, Marbella, Nerja, Lanjaron, Almunecar, Seville and many others.

Metropolitan buses routes offered by the transport consortium of Granada to the villages near Granada do not leave from Granada's bus station.

Where to Buy Tickets

You can buy bus tickets by phone, on the internet at www.alsa.es or directly at the bus station. 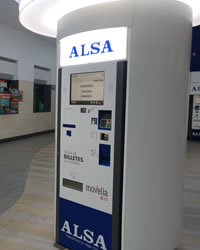 If you are having problems to book a ticket with Alsa

If you try to buy a bus ticket on the Alsa website from abroad and you are not able to do it with your credit card, try PayPal, it usually works. 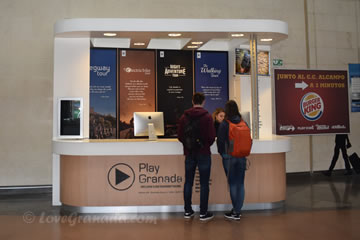 Granada Bus Station has 28 departure bays from which the buses leave to all destinations.

There are good amenities such as information screens providing details of all bus arrivals and departures, restaurant and coffe shop, book shop, cash machines, lockers and information point.

For information on departure and arrival times, destinations and fares, call the bus station on 902 42 22 42 (but it is not easy to get through). 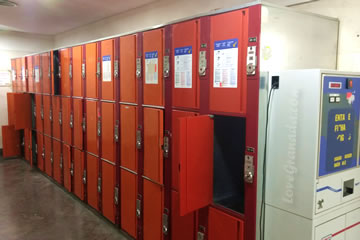 Granada Bus Station has luggage storage lockers. They are on the ground floor, adjacent to the waiting room. The price is 3.50 euros per day per locker. Normally in one locker fits one piece of luggage.

The maximum size of the suitcase that fits in the locket is approx. 25 cm wide and 50 cm high.

Beware! Luggage is left in lockers at one´s own risk; it has been known for certain individuals to hire a locker and make copies of their key, so that when someone else uses the locker, they become the unfortinate victim of locker theft. 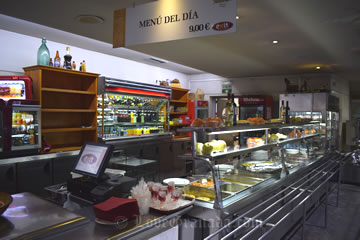 The restaurant has a dining room for groups up to 80 persons.

The daily menu consists of a main course (choice of three dishes), a drink and dessert (choice of five).

A cup of coffee or tea costs around 1,50 euros and the price of the sanwiches is between 3 and 4 euros. 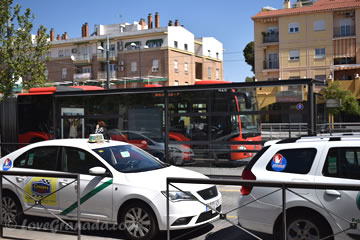 In front of the bus station there is a taxi stand. There are taxis waiting in line that can be taken right away, there is no need to book in advance?

Here is a list of approximate prices of taxi from / to the Granada station.

Getting to the Station and Parking 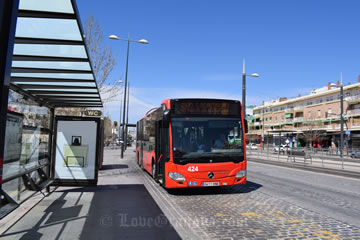 Granada Bus Station is located 15 minutes by bus or taxi from the city centre. It lies on the Carretera de Jaen, in the northern part of the city.

You can reach the Bus Station from Granada city centre by bus route 33 (via Gran Via).

There is a public parking just next to Granada bus station. This parking is usually almost empty. Also there are many free parking areas around the station. 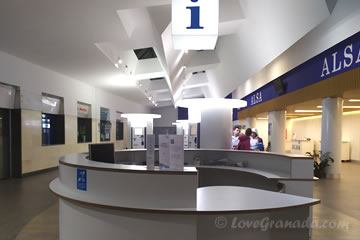 You can call this number to recieve information on timetables and fares, buy tickets and other questions related to Alsa.

The station does not have a phone number where you get information on bus station services: lockers, parking, restaurant, etc.


Lost Property in the Intercity Buses of Granada

Lost objects are stored in the information point which is next to the ticket office at the bus station.

It is not possible to call the bus station directly. Alsa will call the information point to find out if the lost object is there, and then returns the call to the client.

© Copyright • LoveGranada.com • Any use of the content, including copying of it in whole or in part is prohibited.
Opinions about Granada Bus Station
Alsa Buses

I have tried to book a ticket with ALSA from Granada to Malaga Airport. Website in English but you cannot book from overseas as you need Spanish credit card. Really bad service (Jean).
Bad Service

Same problem as above. I have wasted a lot of time on this. Trying to find out if there is a ticket office in downtown Granada but having a very difficult time of it :( (Sarah).

Alhambra Tickets
Where and how to buy tickets for the Alhambra and where to collect them, what to do if tickets are sold out.
Home » Granada Transport » Granada Buses » Granada Bus Station