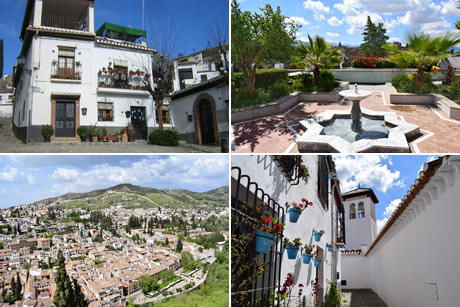 The Albaycin is the old Arab Quarter. It comprises approximately the area between the hill of the Alhambra, the hill of San Cristobal, the Sacromonte and Elvira. The Albaycin is like a different world within Granada. This is due to the strong Muslim influence in this area. It was the place where the first Siri court was built in the eleventh century. 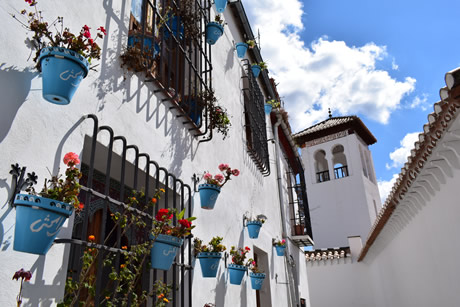 The city descended from Saint Nicholas to the banks of the River Darro. The Albaycin featured luxurious carmenes and public baths, like the Banuelo

At the height of splendour the Albaycin enjoyed in the last years of Nazarid dominance, the quarter comprised a population of more than forty thousand inhabitants and thirty mosques.

The streets were very narrow and small with clean houses, plus numerous wells, some of which are still in the Albaycin.

With the reconquest, the Albaycin was left for Muslims as their own place of residence. But soon the population dwindled. 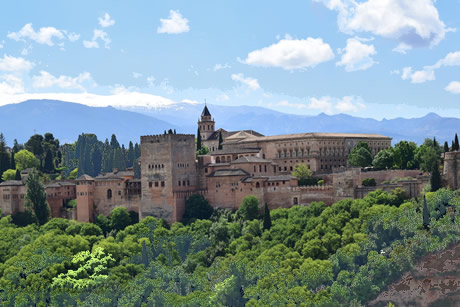 The constant revolts forced the monarchs to expel the Arabs who were practising Muslim. The mosques were demolished and on the same sites churches were raised.

The Moors left behind their homes, which were used by wealthy Christians to build their carmenes.

This is a district to explore. Walk through all its narrow streets and discover things that you cannot find in a guide book. No visit to the Albaycin can be complete without seeing the district from the Alhambra.

The Albaycin is a neighbourhood where you can experience the atmosphere of its bars and terraces, and watch a red sunset over the Alhambra.

Guided tours of the Albaicin

You can explore this beautiful neighbourhood full of history taking Albaicin and Sacromonte Guided Tour.

How to Get to the Albaicin 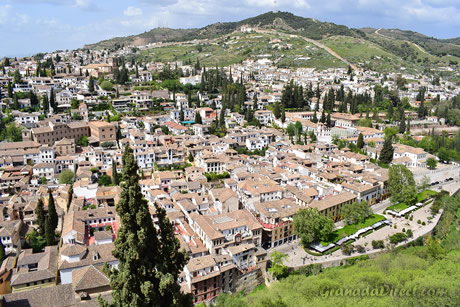 You can reach the Albayzin by taking bus number C31, C32 and C34. More information at Albaicin buses.

The last bus to the Albaycin departure from Plaza Nueva at about 23:00 from Sunday to Thursday, and on Friday and Saturday at 01:00 at night.

Last departure from Albaycin to Plaza Nueva from Sunday to Thursday at 23:30, and on Friday and Saturday at 01:30 at night.

Flamenco shows in the Albaicin

There are many places and caves that offer flamenco shows in Albaicin. The ones that stand out, less commercial, are Flamenco Show La Alboreá and Flamenco Tablao Jardines de Zoraya.

© Copyright • LoveGranada.com • Any use of the content, including copying of it in whole or in part is prohibited.
Opinions about Albaicin in Granada
A place with infinite charm

A place with infinite charm that I advise you to visit. You can't leave Granada without seeing the Alhambra and this neighborhood: the Albaicin.

Do not miss the occasion of trying some 'tapa' in the neighborhood .. especially the area around the Mirador de San Nicolas .. even it is a little more expensive there .. but worth it for the views.

We will return soon and repeat the tour.
Charming neighborhood

The Albaicín neighborhood has a charm that cannot be forgotten. Its streets, the viewpoint of San Nicolás, the Darro river, the Chapiz slope. On this slope is the Palacio de los Córdovas, very beautiful palace and gardens. Everything in that neighborhood is wonderful. I also recommend tapas bars.
Stunning views of the neighborhoods

Is situated on a hill that rises above the city, and pridevos stunning views of the neighborhoods Sacromonte and Albayzin. The elevation, the separation, helps the palace avoid the typical clashing.
Watch out for pickpockets!

I was scammed by the bird poo trick while walking through the Albaicin. Lost 100 Euros, so could have been much worse. Put wallets where they are inaccessible.

If you do get "bird poo" on your clothes and someone is following close behind you and then kindly offers to help clean your back or trousers, trust your instincts - it probably was him - no matter how smart he / she might look.

DO NOT ALLOW HIM / HER NEAR YOU!

Alhambra Tickets
Where and how to buy tickets for the Alhambra and where to collect them, what to do if tickets are sold out.
Home » Granada Beauty Spots » The Albayzin