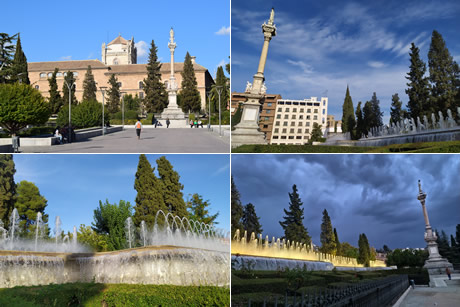 Until the seventeenth century, the Triunfo (Triumph) Gardens were one of the most important districts of Granada where many of the important festivals were celebrated. 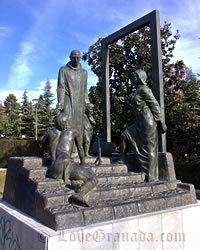 The Triunfo Gardens were originally a large Arab cemetery, founded in the thirteenth century. A strong wall enclosed the cemetery and there was a tower at the entrance of each of the access roads. 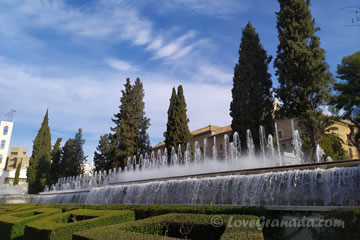 On one side, the compound was joined to the fortifications of the Albaicin, and on the other side was linked with the outskirts of Granada.

Through the centuries the population in Granada grew, and many buildings were built in the early sixteenth century. Therefore, a large part of the Triunfo Gardens became urbanized.

Under French rule, many people from Granada were hanged and shot here. The Triunfo Gardens remained a place of public execution until 1840. 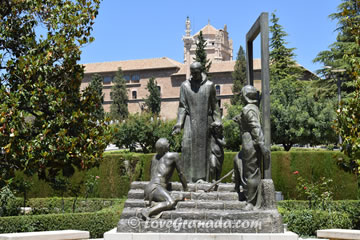 In 1856 D. Manuel Gadea y Subiza, mayor of Granada, transformed the infamous place into a small park, with gardens and fountains.

The opening of the Gran Vía de Colón and its subsequent expansion changed the Triunfo Gardens.

The architect Antonio Flores demolished the gardens, leaving only the isolated column of the monument to the Virgin until it was moved in 1960.

The new Triunfo Gardens were created on the site formerly occupied by the old Plaza de Toros.

How to get to the Triunfo Gardens

© Copyright • LoveGranada.com • Any use of the content, including copying of it in whole or in part is prohibited.
Opinions about Triunfo in Granada
Fountains at night and the Royal Hospital

We found this place by chance, since it was near our hotel. It is more of a square than a garden, but the large fountain offers a nice show at night. It shines in different colors. We were curious about the building behind the fountain, and it turned out to be a wonderful place: the Royal Hospital (Hospital Real). Very recommended!

Alhambra Tickets
Where and how to buy tickets for the Alhambra and where to collect them, what to do if tickets are sold out.
Home » Granada Beauty Spots » Triunfo Gardens in Granada