Carrera del Darro is name is given to the entire left bank of the River Darro, and should not be confused with the Acera del Darro. 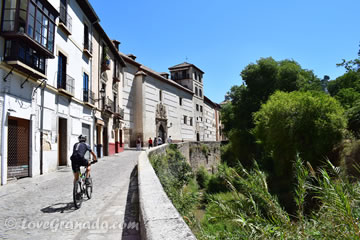 Carrera del Darro is one of the most scenic walks in Granada. To the right of the River Darro, it is crossed by two brick and stone bridges (Cabrera and Espinosa), which link Carrera del Darro with the neighborhood of the Churra.

It runs between the river, the forest of the Alhambra and the Almanzora, which extends up the slope of Gomerez. 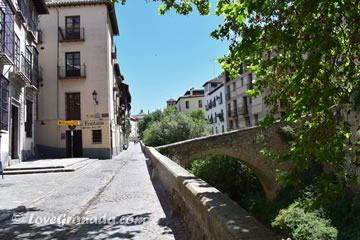 The street dates from the seventeenth century. Because of the damage caused in 1509 by the explosion of an ammunition dumo near the Church of St. Peter, part of the wall that ran here was demolished which changed the direction of the river, hence widening the street.

How to Get to Carrera del Darro

You can get to Carrera del Darro by bus number C31, C32 and C34. The bus stop is 'Paseo de los Tristes' or you can walk from Gran Via.

Amazing views, specially at night when the churches along the way are illuminated, and the Alhambra on the top of the hill shines beautifully. We were there on a summer night and the experience was very pleasant. The only place in the city where we could dodge the heat. At the restaurant & bar terraces by the river you can feel the cool air of the place.
Sponsored Links

Alhambra Tickets
Where and how to buy tickets for the Alhambra and where to collect them, what to do if tickets are sold out.
Home » Granada Beauty Spots » Carrera del Darro in Granada