In the XVI century this palace called Casa de los Tiros was an ancient fortress surrounded by Christian houses. It was part of a city wall that surrounded the potters' quarter. 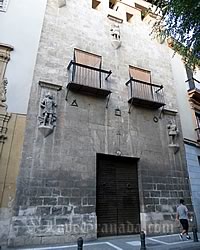 In 1921 it became State property and it currently holds a Library and Archives about Granada´s arts and traditions. The facade opens into a beautiful tower topped with battlements, among which are muskets, which gave its name to the house.

Admission to this Museum is free for EU citizens. Other countries 1,50 euros.

Contact Details and How to Get to Casa de los Tiros

You can get to the Casa de los Tiros on bus C31, C32 or C34. More Information in Granada Buses.

© Copyright • LoveGranada.com • Any use of the content, including copying of it in whole or in part is prohibited.
Opinions about Casa de los Tiros in Granada
Interesting museum but no description in English

Casa de los Tiros is a historic building built in 1530, great example of Renaissance but not quite a palace, from outside has a fortress-like appearance.

Many important artefacts and paintings showing the history of Granada and various exhibits showing recent history of the city. For me the best objects are the portraits of the Catholic Kings along the stairs.

It takes about a half hour to see the museum. Unfortunately all information is in Spanish. Some objects are without description.

The entrance is 1.50 euros, free for EU citizens.
Good collections of paintings and sculptures

A 16th century old Moorish building, inside its stone walls are paintings of ancient warriors in the plaster and amazing ceiling. Only one tower survived from the original building.

Offers collections of sculptures, paintings, portraits of Spanish monarchs and pottery. But the most interesting part is a hall called Cuadra Dorada. Other parts of the museum are less interesting.

Interesting also the ceremonial sword of Boabdil, the last Nasrid king of Granada.
The best area is Cuadra Dorada

It is a little local history museum, used to be a noble's house, one of the first houses of this type built after the conquest of Granada by Catholic Monarchs.

Have portraits of the Catholic monarchs and Andalusian crafts. Probably the highpoint is Cuadra Dorada (Hall of Gold), a room with gold carved wooden ceiling with the stars and decorated stone walls.

Located in the Realejo district near the city centre of Granada. No information posters are in English.

Alhambra Tickets
Where and how to buy tickets for the Alhambra and where to collect them, what to do if tickets are sold out.
Home » Granada Museums » Casa de los Tiros