For a whole week there are all kind of celebrations and cultural events in the streets: free puppet shows, a bullfighting festival, traditional processions, theater, concerts, exhibitions, etc...

What Happens in Corpus Christi in Granada in 2022?

There are also some free flamenco and regional music performances in the center and the casetas (huge tents) at the fairground), which it is located in the north of the city, near the bus station. Flamenco outfits and decorations spread all over the city. The atmosphere is amazing! 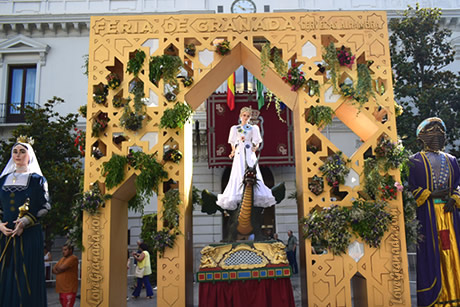 The first is the Tarasca (Tarasque), of pagan origin, which takes place on Wednesday morning and marks the beginning of a long school break. It's very popular with children. 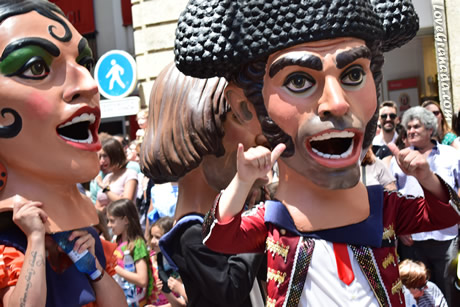 In this procession, a figure of a woman on a dragon is accompanied by gigantes y cabezudos (giants and big-heads).

These caracthers are key participants of the celebrations, since they represent important people in the history of Granada, such as the Catholic Monarchs.

The cabezudos' main feature is their huge papier maché head.

The other procession, takes place on Thursday, the Corpus Christi day, and is a solemn and religious event. 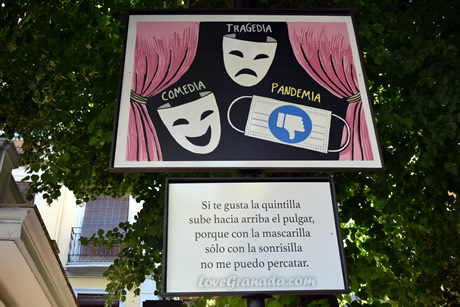 A week before Granada Fair kicks off, the carocas and quintillas (a traditional satirical competition) are displayed in Plaza Bib Rambla, near the Cathedral.

This tradition dates back to the seventeenth century, and in the nineteenth century they started to use this location for their public exhibition. 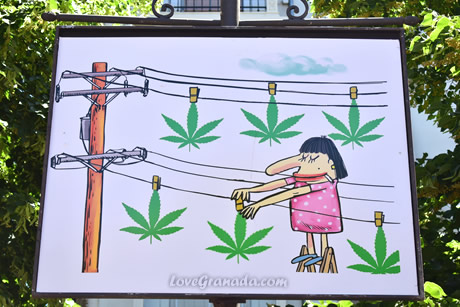 These Carocas are cartoons with satirical verses which humorously highlight major local and national events that took place during the year.

The authors are usually local artists, most of them amateurs who compete among hundreds of participants to be selected.

Every year only 20 carocas are published and they get a small cash prize of 90 euros. In 2022 from 260 carocas presented 20 were selected and will be displayed in Plaza Bib Rambla on May 11th. 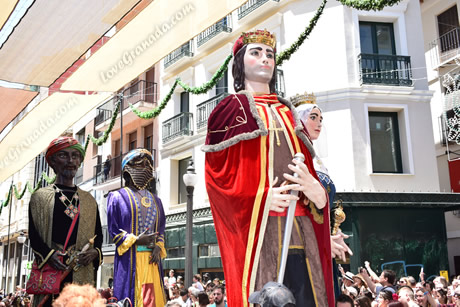 The celebrations last about one week. In 2022 Granada Fair would be held from 11 to 18 of June:

Corpus Christi in Granada is usually held in June, but the date depends on Easter. You can find out by counting 60 days from Easter Monday.

That Thursday of Corpus Christi is a bank holiday in Granada (not in the province) and shops are not open. Friday is also a school holiday. 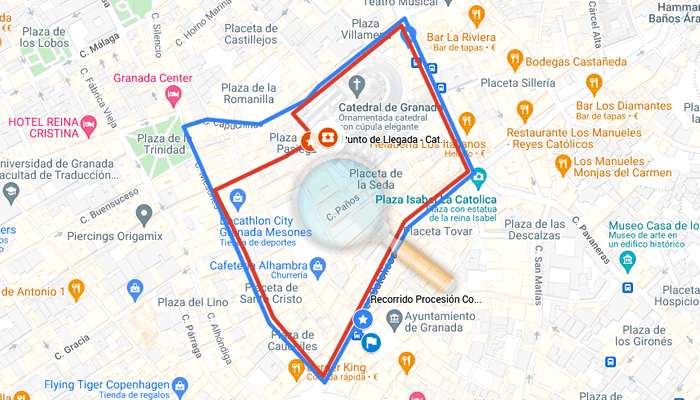 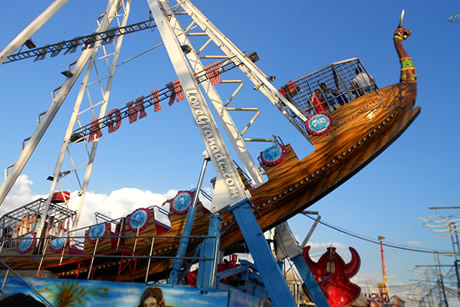 Alhough Granada Fair is less famous than Seville's one, it offers a great deal of fun and entertainment and has got distinctive features.

The Corpus Christi fair in Granada begins on a Saturday at midnight, when, in an official ceremony, the major of the city witnesses the lighthning of the fairground.

Each year a resident of Granada is picked at random for this ceremony. 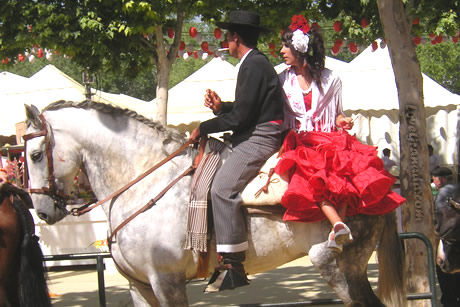 The fairground area has three different parts: the casetas area, the swings and attractions area, and the sorrounding area, where you will find many stalls selling food, drinks, sweets, etc.

It's like a whole city that appears here only for a week. Every street at the fairground is decorated with thousands of typical lanterns, called farolillos, and it's a very busy and loud place. 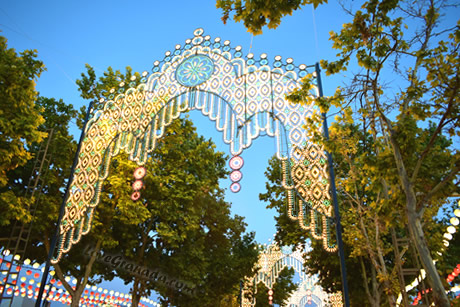 The main entrance to the fairground area is outstanding.

Thousands of bulbs are used to reproduce an emblematic monument of Granada, and the chosen monument is revealed just few weeks before the event.

This year the main entrance of the fairground will recreate the Gate of the Pomegranates, which is located in the Alhambra woods. 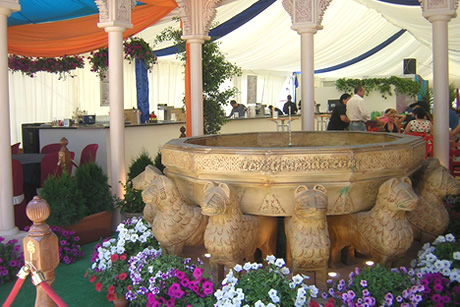 In Granada fair Casetas are usually open to the public, unlike in Seville.

Some of them belong to groups of friends or associations, who pay a regular fee, but unless they are holding a private event they are happy to have some visitors. 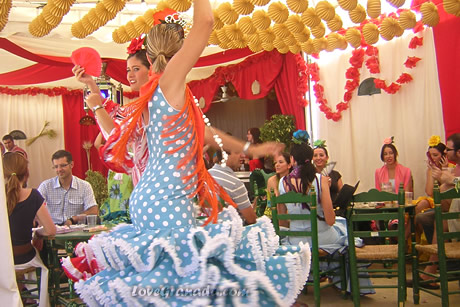 There is free entry in all of them and special events, such as children enterteinment, traditional food contests, etc...

What to do in the casetas?

The fiesta takes place in the casetas. There is a bar, where you can taste some typical Spanish food and wine, and there is a stage, where you could enjoy yourself watching a show or dancing sevillanas.

Usually, there are some bands playing traditional music at the institutional casetas.

How to Reach the Fairground

Six city buses routes (Feria 1-6) will take you to the Almanjáyar Fairground during Corpus Christi 2022.

The price of a trip is 2 euros. You can use normal city bus pass (Credibus) o pay to the driver. 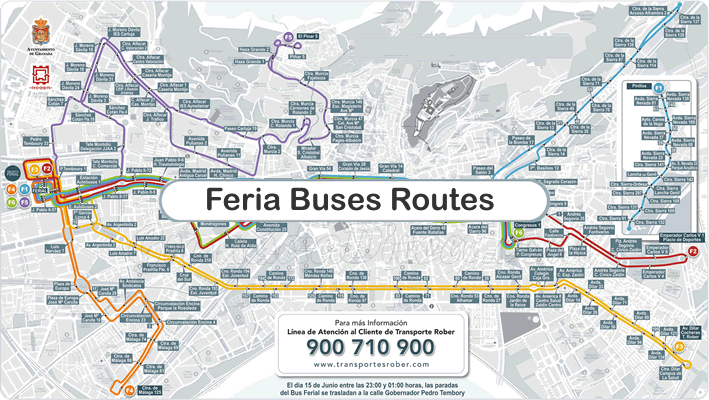 There is public parking with security between Casería de Aguirre and Joaquina Eguaras streets. It is not recommended to park outside the official parking sites.

Location of the Fairground in Granada

Granada's fairground is located at Almanjáyar, in the northern part of the city, near the Granada Bus Station.

© Copyright • LoveGranada.com • Any use of the content, including copying of it in whole or in part is prohibited.
Opinions about Corpus Christi in Granada
Thank you Granada

What a city, so happy we came to enjoy all Granada city offers, fantastic tourist sites, walks food, wine and most of all the people of Granada, the festiville of corpus christie today was a plesure to see and enjoy, thank you Granada.
The highlight of our stay in Granada

Wonderful fiesta. Beautiful little ladies and glamorous ladies. The highlight of our stay in Granada so far (Margaretha).

Alhambra Tickets
Where and how to buy tickets for the Alhambra and where to collect them, what to do if tickets are sold out.
Home » Granada Festivals » Corpus Christi in Granada