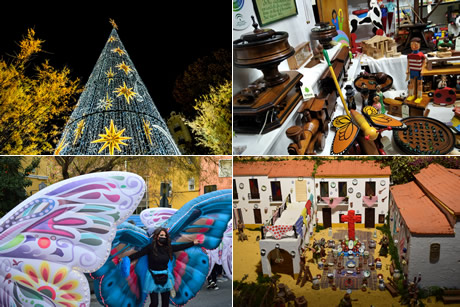 At Christmas the streets of Granada are embellished with thousands of lights and Christmas decorations. 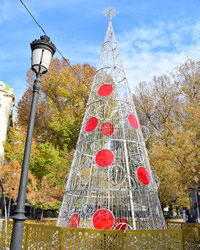 The sounds of Christmas carols are heard in the streets, where people are very busy shopping, meeting friends or just taking a walk with the family to see the magical atmosphere that invades the city at this time. 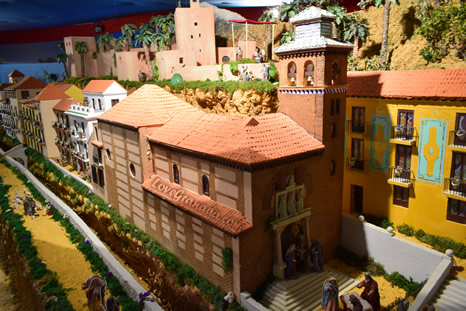 Children and adults enjoy visiting the many Nativity scenes (belenes) that spring up all over Granada and compete for the Town Hall reognition and awards.

The night of the 5th of January the Three Kings (Reyes Magos) arrive to town bringing sweets and toys for the children. It´s the climax of the season.

As you see, many events take place in the streets of Granada during these days: Christmas concerts and traditional Christmas markets, Nativity scenes (belenes) and the New Year´s Eve party in front of the Town Hall, where thousands of people gather to eat the traditional lucky grapes (doce uvas de la suerte) and celebrate together the New Year. 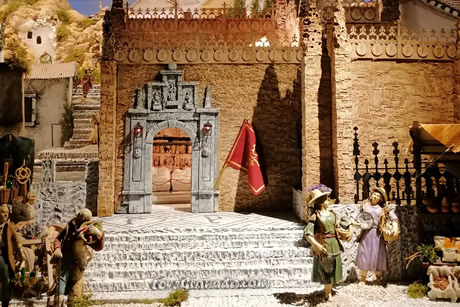 Each year the Town Hall organizes a contest to promote this tradition and rewards the best "Belenes" in town according to three categories: artisanal, traditional and popular.

This visual representation of the birth of Jesus is a tradition that comes from the thirteenth century or earlier.

You can make a route to see the best "belenes" of Granada and enjoy the atmosphere in the city during Christmas and New Year.

And if you wish to set up your own belén at home, visit the Christmas market at Plaza Bib-Rambla.

Another Spanish Christmas tradition is the Christmas Lottery: "La Lotería de Navidad" (the biggest of the year). It is drawn on 22nd December and usually people follows the event on TV, or on the radio if they are working. It´s a classic. 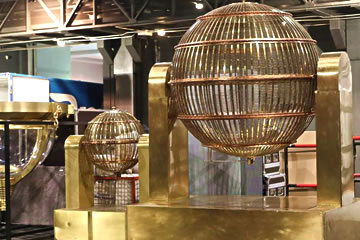 If you have a chance to watch it, you will see why is very entertaining (even if you can´t understand a word). This is the first day of the school holidays and marks the begining of the season.

During the day friends and colleagues might meet to have a drink and tapas. In the evening, people gather at home to enjoy a meal with their families. This is the most important celebration for the families on Christmas.

Usually lots of relatives gather together around the table and celebrate singing carols, drinking and eating a lot.

All shops close earlier this day. However, bars, clubs and pubs open later at night, when people go out after the family dinner to dance and enjoy the night.

Some people like attending the traditional midnight mass "misa del gallo" wich takes place at different times in each church.

You have to check the timetable at the church the previous days. There is a very beautiful "misa del gallo" in San Pedro and San Pablo church at Paseo de los Tristes by the river Darro.

It´s celebrated with the choir of the Hermandad rociera de Granada and they sing flamenco carols during the mass.

On Christmas Eve children may receive some gifts, but the traditional day for the gifts is the Epiphany Day on the 6th of January.

Christmas Day is a national holiday in Spain and all shops are closed. It´s a day to relax and rest from the excesses of the previous night.

The Spanish tradition says that on New Year´s Eve at the stroke of midnight one must eat a grape for each chime of the bell, that will garantee plenty of good luck during the New Year. 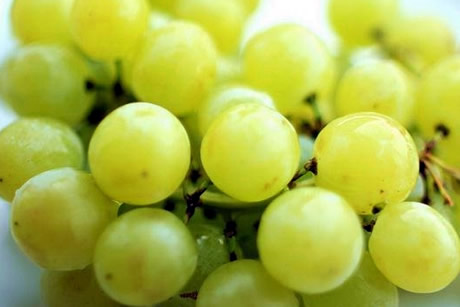 Celebrations around the country begin at the main square of the towns, like Puerta del Sol in Madrid, just in front of the Town Hall´s clock, where everybody gathers to eat the grapes together.

These special moment is broadcasted by all channels and families congregate around the television to eat their twelve grapes.

Granada is not an exception, and on New Year´s Eve the Town Hall organizes a big party at Plaza del Carmen with live music and fireworks.

Celebrations continue all night long, first on the streets and then at pubs, clubs, discos and private parties.

At dawn, just before heading home, one must have a hot chocolate with "churros" to follow the tradition.

The first day of the New Year is a quiet day in Granada, as many people sleep all day and all shops are closed. It´s also very difficult to find a bar or restaurant open. 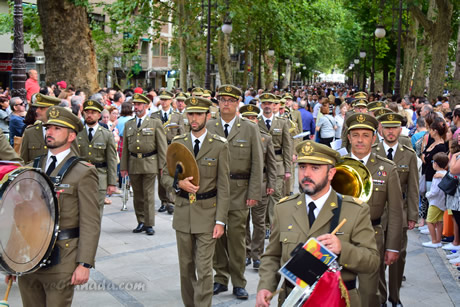 Like in many other cities around the world, the traditional New Year´s Concert takes place in Granada this day, usually at the beutiful Auditorio Manuel de Falla on the hill where the Alhambra is located.

However, on the 2nd of January the town is ready to celebrate again. This is a very important date in the history of Granada and Spain, and it´s a local holiday in the work calendar.

On the 2nd of January of 1942, Boabdil, the last Nasrid king of Granada, delivered the Alhambra and his kingdom to Ferdinand and Isabella, the Catholic Monarchs.

Granada was the last Moorish and Muslim kingdom in the peninsula, and this day closes a very important period in the history of Granada. 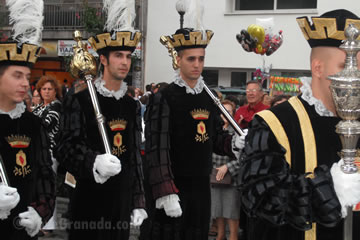 Traditionally, celebrations begin at the Capilla Real (Royal Chapel) of the Cathedral, where the Catholic Monarchs are buried.

Once the mass is over, celebrations are taken to the Town Hall, where the youngest person in the local government flutters the city banner from the main balcony.

This historic day has been celebrated this way for more than 500 years, however, new voices are been heard amongst granadinos asking for a change to adapt the ceremony to the present days.

Another ritual, less polemic than the pevious one, used to take place in Granada every 2nd of January. On the top of the most important tower of the Alhambra, the Candle Tower (Torre de la Vela), lots of women want to ring its bell.

According to the tradition if they do so, will get married before the year ends. 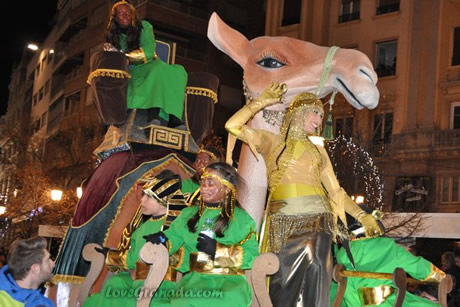 On the night of January 5 Granada is full of magic. All children and many adults take to the streets to receive los Reyes Magos (literally "the magician kings"), who walk the streets promising many gifts for the next day.

It´s a spectacular parade. Around 30 fantastic carriages and more than a thousand people wearing lovely costumes take part of it.

The crowd enjoy such an amazing display of lights, colour and music, and bear the cold with a smile while trying to "catch" some of the sweets and toys that are thrown up by their Majesties and their pages. 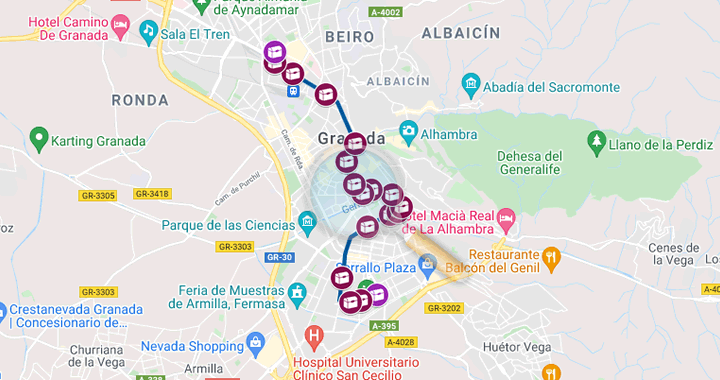 This parade symbolizes the coming of the Three Wise Men to Bethlehem, and it´s the most special night of the year for Spanish children. It's the night when all their dreams become true.

In Spain, traditionally the Christmsas gifts are exchange on the 6th of January, Epiphany Day.

On the 6th of January Spain celebrates the Día de Reyes (Epiphany Day), and most families gather at home to eatthe traditional Roscón de Reyes and open the presents they found in the morning. 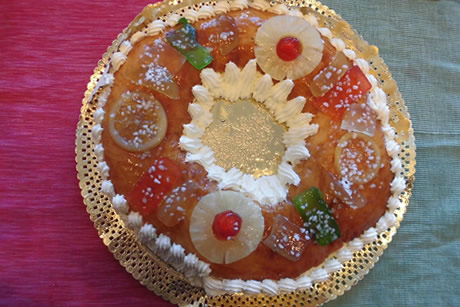 It´s a national holiday and all the shops are closed in Granada. Also, the children are on holidays, since Christmas holidays lasts in Spain until the 7th or 8th of January.

The tradional Roscón is a large donut-shaped cake filled with cream that most bakeries make in Granada. Be careful when you bite into it because this nice cake is filled not just with cream.

Traditionally, one little clay figure and one broad bean are hidden inside it. If you are the one to find the little king in your piece, you´ll be crowned the king or queen of the day. If you find the broad bean, you'll have to pay for the cake.

Christmas Shopping - During All Christmas

There are several areas of Christmas shopping in Granada. Major clothing brands like Zara, H & M, Mango, Promod, ...are located near Puerta Real. 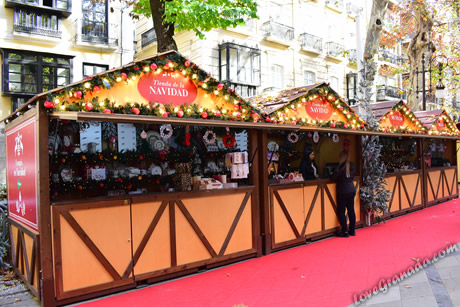 There are also many small shops very interesting and original. Undoubtedly, you have to visit the following streets: Recogidas, Reyes Católicos, Zacatín, Mesones and Alhóndiga.

If you're looking for toys, in calle Alhóndiga there is an interesting shop: Eureka.

Every year during the month of December until the 6th of January takes place in Plaza Bib-Rambla the traditional Christmas market.

You can find traditional Nativity figures and everything you need to decorate your home at Christmas.

There is also a market around Puerta Real selling traditional Christmas sweets made by nuns in the local convents, wooden toys, different types of crafts: leather, ceramics, silver, etc ...

© Copyright • LoveGranada.com • Any use of the content, including copying of it in whole or in part is prohibited.
Opinions about Christmas in Granada
No reviews yet.

Alhambra Tickets
Where and how to buy tickets for the Alhambra and where to collect them, what to do if tickets are sold out.
Home » Granada Festivals » Christmas in Granada