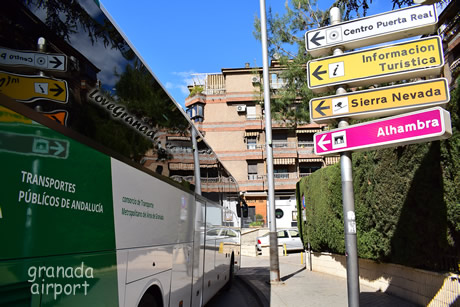 The company that operates Granada Airport bus route is Alsa, route 245. The destination is listed in front and on the side of the bus. 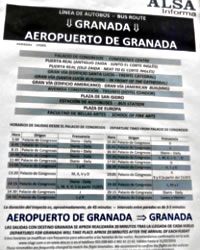 The fare is 3 euros from the Airport to Granada city centre.

The ticket can be purchased directly on the bus, at Granada Bus Station or at www.alsa.es.

Alsa (the company that offers this service) makes frequent changes in schedules, not to miss your flight, it is also highly recommended to check bus timetables on www.alsa.es a day before your flight.

Bus Stops from Granada to the Airport

The journey time from the first stop, Palacio de Congresos, to Granada Airport is about 45 minutes.

Bus Stops from Granada to the Airport 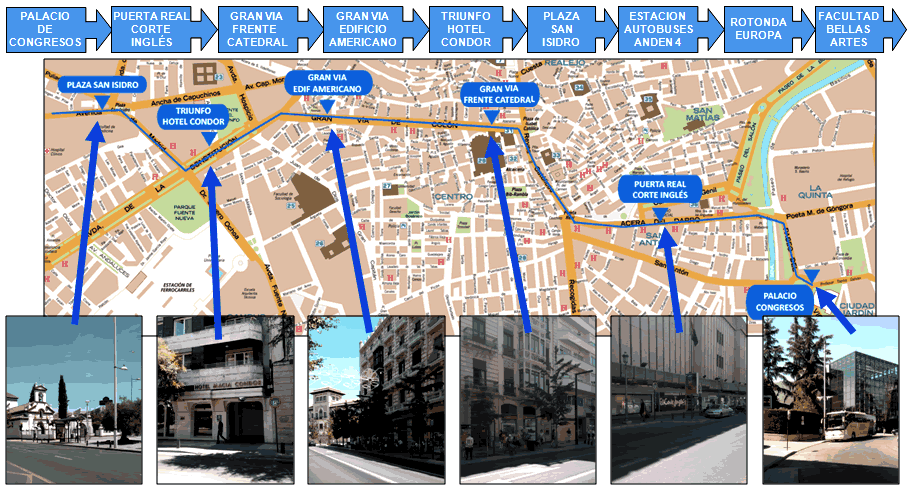 Bus Stops from the Airport to Granada

The Granada Airport Bus departs for Granada city centre about 30 mins after the arrival of each flight.

If there is any delay, for example you lost our luggage and have to report it, etc. you might miss the bus and have to wait up to two hours to take another one.

We Answer Your Questions

How much is the Taxi from the Airport to Granada? 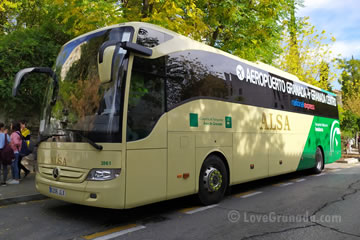 If the airport bus reaches the Alhambra?

No, you have to get off at the Cathedral and take a minibus 'Alhambra Bus' (next to the Columbus monument) route C30 or C32 to the Alhambra.

What is the nearest bus stop to Granada Train Station?

You have to take the bus from Granada Airport to Granada city centre and get off at Avda. Constitución 4, Hotel Abba.

Avda. Constitución is only a 3-minute walk to the Granada Train Station.

How long does it take from the first bus stop to the Triunfo Gardens?

© Copyright • LoveGranada.com • Any use of the content, including copying of it in whole or in part is prohibited.
Opinions about Granada Airport Buses
Terrible

We took this bus expecting to be dropped off at Catedral, which was a 2-minute walk to our apartment.

The bus we took stopped at Hotel Abba, and the driver very unceremoniously asked everyone bound for Catedral to get off as Via Gran Colon was closed.

A15-minute walk under the hot sun dragging our heavy luggage was NOT a great start to our Granada holiday.

Couldn’t they have informed us prior to boarding that our stop would be skipped???
Locations Move without prior knowledge

The area where they pick people up will change with the wind. I’ve had three experiences with them; all of which included running around different pickup stops— all of which aren’t specified.

So if you trust your Google Maps or the word of locals, you’ll get carried locations.

Obviously, if you don’t want to be running back and forth, with the real chance of missing your flight, then I’d just chop up the €20 to take a taxi to the airport.

Also, don’t listen to the doodoo head who blames the ALSA bud service on their incompetence. It’s not the bus’ fault for the patron not knowing that it’s not a personal shuttle bus.
No luggage, no bus, ripped off by taxi driver

We thought this was a regular bus service, as in - it left on the hour every hour etc.

We arrived at Granada airport in the early evening, discovered Iberia had lost our luggage, waited for at least 15 minutes after the luggage carousel stopped tu
ing until someone opened up a desk to enable us to report lost baggage.

Then discovered the bus had left and there would not be another one until the next scheduled flight which was almost two hours away.

Thinking the bus was a shuttle service we had arranged to meet our holiday landlord at a specific time in central Granada.

Ended up taking a taxi whose driver had seen the opportunity and had upped the fare from 25 to 30 Euros excusing it as a holiday fare. It was the day before Reyes Magi.

Consequently visit to Granada did not start well. No luggage - no bus, ripped off by taxi driver (Maggie).
Great inexpensive bus

Great to have an easy, inexpensive bus from the centre of town to the airport! (Jenny)

Alhambra Tickets
Where and how to buy tickets for the Alhambra and where to collect them, what to do if tickets are sold out.
Home » Granada Transport » Granada Buses » Granada Airport Buses