Almuñécar Urban Buses, Bus Station and How to Reach Almuñecar from Granada 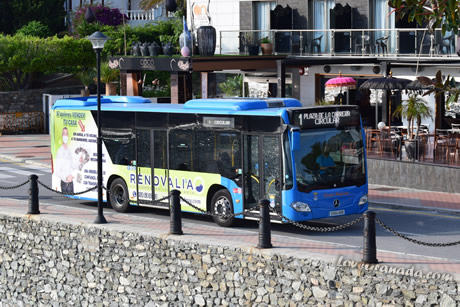 Here you can find useful information about the connections between Almuñecar and Granada, the Almuñécar Bus Station services and the Almuñécar urban buses. 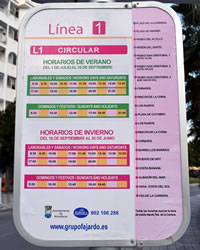 In Almuñécar there are 5 city bus routes: 1 circular route conecting the neighborhoods with the urban center and 4 bus routes that connect city centre with Velilla beach, Marina del Este port and la Herradura.

Buses Between Almuñécar and Granada

The buses of Alsa company (telephone 902 422 242) travel nine times a day between Granada (departure from the Granada Bus Station) and Almuñécar (Almuñecar Bus Station), between 7:00 and 20:00. 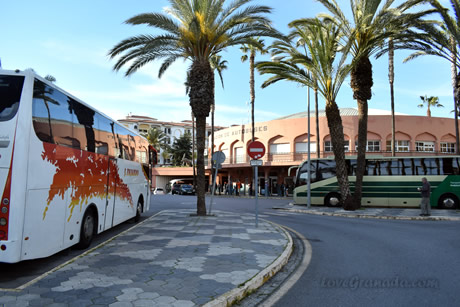 The cheapest ticket from Granada to Almuñecar costs 3.35 euros and the journey takes between 1h 15m and two hours.

The most common price is 6-8 euros, to buy a 3.35 euro ticket you have to book about three months in advance.

Please pay attention to the duration of the trip when choosing a ticket, as some buses do not have direct routes, they stop in the villages Armilla, Alhendín, Cázulas, Lentegí, Otívar and Jete, that's why it takes longer.

The fastest bus from Granada to Almuñécar leaves from the Granada Bus Station and makes two or three stops before arriving at the Almuñécar Bus Station: in Salobreña (55 minutes), La Caleta next to Salobreña (1 hour) and Taramay (1 h and 05 m, does not always stop here).

Tickets can be purchased on the Alsa website, alsa.es.

The bus company that run this service is Grupo Fajardo. There are 5 urban bus routes in Almuñécar. The bus schedules vary according to the season of the year. 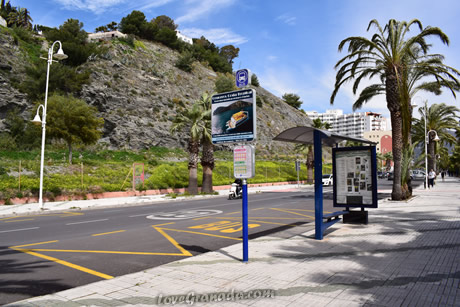 In winter, from September 16 to June 31, there is little frequency. From July 1 and until September 15, when there is more demand, buses run more frequently.

The ticket costs 1 euro for each trip. If you get off of your original bus and get onto another bus route, it's another trip, there are no free transfers like in Granada. Pay the fare directly in cash to the driver.

There are two routes with number 2, one to La Herradura and another to Marina del Este.

From Almuñécar to Marina del Este by La Herradura

From Almuñécar to La Herradura by Marina del Este

The Almuñécar bus station is located at the entrance to the town, about 500 meters from the city center, in the Terrazas del Mar building. It is circular shaped orange building with 'Estacion de Autobuses' written on it. 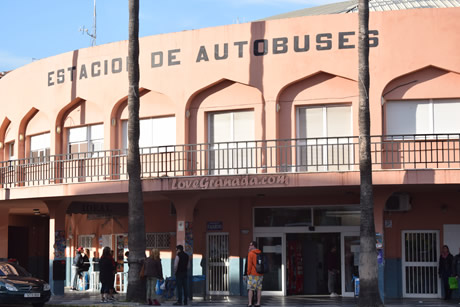 It is a small station and has basic facilities: press kiosk, toilets and ticket machines.

There is no bar or cafeteria inside the station but there are several establishments in the vicinity where you can buy snacks.

The supermarkets Dia, Lidl and Mercadona across the street, several local bars and restaurants and the McDonalds next to the station.

Where to Buy Bus Tickets?

You can purchase tickets from the ticket windows or the automatic vending machines located at the Almuñécar Bus Station.

Next to the station there is a taxi and the urban buses stand, in the Plaza de la Carrera.

At this stop you can take Bus Route 3: Velilla-Pozuelo-Taramay.

On the other side of the road there is another stop of the Route 3 in the opposite direction.

© Copyright • LoveGranada.com • Any use of the content, including copying of it in whole or in part is prohibited.
Opinions about Almuñecar buses
No reviews yet.

Alhambra Tickets
Where and how to buy tickets for the Alhambra and where to collect them, what to do if tickets are sold out.
Home » Costa Tropical » Almuñecar » Buses of Almuñecar