What is Granada Card?

Granada Card is a card that includes the entrance to the Alhambra and other main monuments and museums of Granada, 9 urban bus trips, and a trip on the tourist train.

Granada Card is also called Granada City Pass (Bono Turistico in Spanish). By buying the tourist pass you can save up to 36% compared with purchasing the entrances to the main attracions separately.

The tourist sights included in Granada Card can only be visited once.

There are no discounts for seniors or students.

The City Pass does not allow changes or refunds once purchased. So, double-check the date and time before making your purchase.

There are 7 types of Granada Card. All 7 types include the entrances to the monuments, trips in urban buses and 1 tourist train trip.

The difference between them is the type of the Alhambra entrance (daytime, nightime, only gardens, etc). One modality/type (Granada Card City) does not include entrance to the Alhambra.

Here we explain these differences and other details of the Granada Card.

What does the Granada Card include?

Entrance to the Main Monuments

Entrance to the principal monuments of Granada:

9 trips on any Alhambra Bus or Granada Urban Bus.

1 ticket for the Touristic Train valid for 24 hours. It is not allowed to get off the train at the stops (no Hop on Hop Off).

The Modalities of Granada Card

As we have already mentioned, there are 7 types/modalities of Granada Card.

This modality includes the general daytime entrance to the Alhambra, the Alcazaba and the Generalife gardens + monuments + urban buses + tourist train. This modality has the highest demand.

For those who do not know, Nasrid Palaces are the royal apartments within the Alhambra.

This modality includes the Generalife Gardens + monuments + urban buses + tourist train. You can not see the Nasrid Palaces.

This modality includes night visit to the Gardens of the Generalife + monuments + urban buses + tourist train. You can not see the Nasrid Palaces.

This modality includes the general nighttime entrance to the Alhambra, daytime visit to the Alcazaba and the Generalife gardens + monuments + urban buses + tourist train.

It is the only modality, apart from the first (Granada Card), which includes daytime entrance to the Alhambra, the Alcazaba and Generalife + Andalusian monuments + monuments + urban buses + tourist train.

This modality does NOT include entrance to the Alhambra. It includes the Granadas's main monuments + urban buses + tourist train. 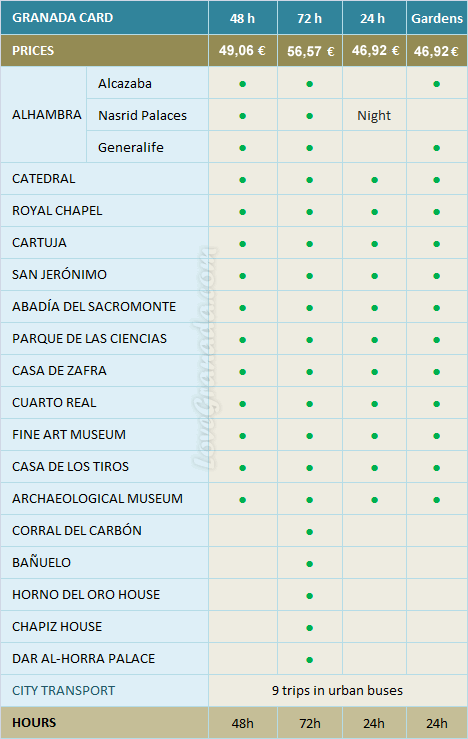 What Does it Include? 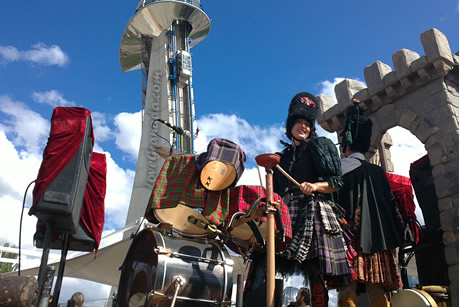 Includes the same entrances and services as the adult City Pass.

How Much It Costs

For children from 3 to 11 years old. The child city pass is always associated with an adult city pass.

For the entrance to the Alhambra you need to get a free pass at the Ticket Hall in the Alhambra.

Is it Worth to Buy the Granada Card?

Alhambra
€14
Cartuja Monastery
€5
Cathedral
€5
Royal Chapel
€4
San Jerónimo Monastery
€4
Science Museum
€7
Andalucía Museum
€4
Sacromonte Abbey
€4
9 bus trips
€7,65
Tourist Train
€4
Total
58,65
Let's calculate how much it would cost us to use the urban buses and to see all the monuments which are included in the Granada Card if we visit them without the card:

It is worth it when you visit more than 68% of the atractions included in the pass and and use public transport.

Where to Buy and Collect the Granada Card

You can buy the Granada Card only in advance at: www.clorian.com/site/GranadaTur/. 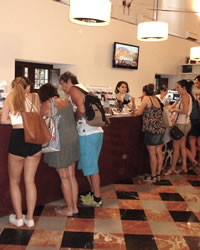 Once you buy the card you will be shown "print at home" page. This paper has to be presented at the entrance to the monuments.

The City Pass can be purchased from 1 day to 3 months in advance, and you can get up to 8 passes with 1 credit card.

It is enough to show "Print at Home" paper at the entrance to the monuments or show the 'ticket' on your mobile.

But if you want to use the urban buses you have to collect the credibus (travel card) at the vending machines that are located in 6 bus stops (route 4 of the urban buses) in the city center.

See the location of the machines on the map:

If you have some problems getting the travel card from the vending machines you can call 858 880 990.

But if you plan to use the tourist train, you need to collect the tickets at Carrera del Darro 3A (Granada City Tour office). Phone: 958 224 527.

There may be some specific offers or changes, find out more in granadatur.com.

Alhambra Entrance with the Granada Card

You can enter the Alhambra by showing the "Print at Home" or mobile phone ticket at the gates. There is no need to queue at the ticket office.

The day you choose to visit the Alhambra can be the same when the City Pass starts as long as you bought the pass at least 1 day in advance.

The visit to the Alhambra is divided into three areas: the Generalife, the Alcazaba and Nasrid Palaces and must visit all three on the same day.

Opinions about Granada City Pass
Excellent guidance
Excellent guidance provided by your website. Thanks a lot for understanding the problems of tourists from foreign countries (Syed).
Third world experience
First it is very bad that you are de facto obliged to buy an expensive card to get access to the Nasride palace, which should theoretically cost 14 Euro but is unaivalable at that price in order to oblige tourist to buy additional services.

Second, once you decided to accept this unfair system and spend a lot of money for services which are unrequested and will not be fully used, the website is extremely poor and you might spend hours trying to conclude your transaction!

In short, third world experience!
Booking is not smooth and unnecessarily complicated
I'm very unimpressed with the websites that sell the card. They're ok for information but booking is not smooth at all. It seems unnecessarily complicated. The links to find out availability for the Alhambra with the Bono Turistico don't work. I'm going to try phoning but I live in Spain and speak Spanish. I can understand the frustration of those trying to book from abroad (Karen).
I have tried to purchase this card 5 times
I have tried to purchase this card 5 times today.. they will not take a debit card. This is ridiculous as i do not have or want a credit card!..unimpressed (Christine).
It seems like all the tickets which include Nasrid Palaces are sold out. I read it is possible to visit Alhambra and the Nasrid Palaces also having the city pass.
You visit the Alhambra and the Nasrid Palaces the same day. You specify the date and time of the visit (of the Nasrid Palaces) when you buy the Granada city pass.
Tickets
I had a funeral the day I was supposed to take the bonus so I was 2 days late, arriving on a Sunday after 2pm. Nowhere was opened to get the bonus. Don't think it's fair that you don't change it but you are also close. NEVER AGAIN I will get anything in advance.
On Line Orders
I have tried to purchase tickets at Ticketmaster.es. Every time I try I am told I have run out of time. This is imposable! Also I get sent in circles to get to the booking page.
Sponsored Links
Alhambra Tickets

Where and how to buy tickets for the Alhambra and where to collect them, what to do if tickets are sold out.
Home » Granada » Granada City Pass