Palaces of the Alhambra - the Famous Nasrid Palaces, Unique in the World 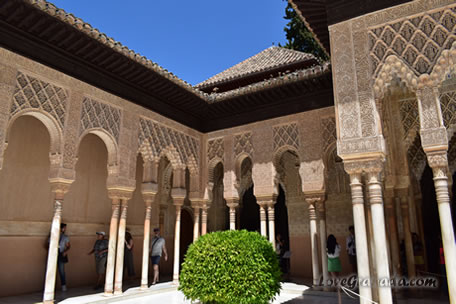 The Alhambra is not just a monument but an entire walled citadel: the towers and defensive gates, the baths, the gardens and the palaces. 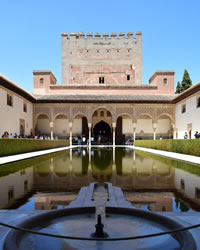 This is the place where the Sultan lived with his family and consist of the beautiful palaces, the royal court and a maze of rooms. 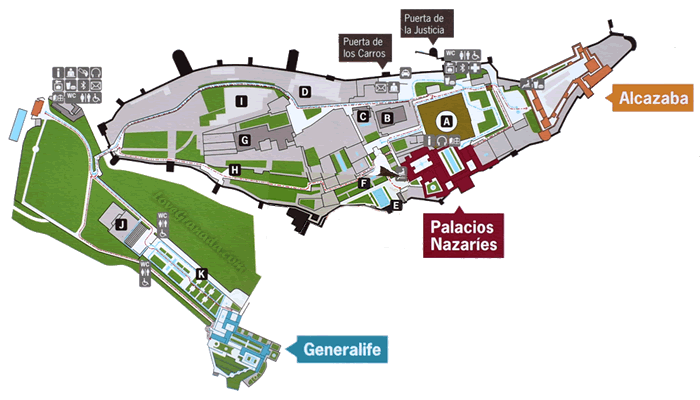 The Catholic Monarchs settled in these Nasrid palaces, making some modifications and, later, their grandson Emperor Charles V built his own palace in the place of the Mosque.

Location Map of the Nasrid Palaces

In this part of the Alhambra there are ten different palaces. Some of them are very famous and are still well preserved, such as the Palacio de Comares and the Palacio de los Leones. 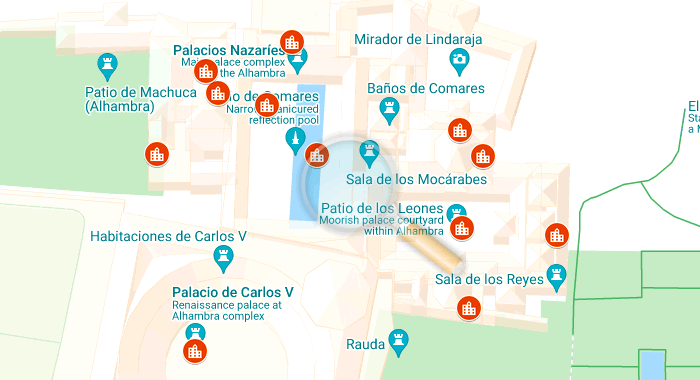 Others, however, are already distant memories of a previous era, archaeological remains that tell us about turbulent times and lost wars, such as the Palace of Abencerrajes or the palace of Muhammad III (now the Parador Hotel).

The Nasrid Palaces are the most visited area of the Alhambra. Access to the palaces is restricted because of limited capacity, so you have to select the date and time of your visit when purchasing the ticket.

How many Nasrid Palaces are there in the Alhambra?

The monumental complex known as the Nasrid Palaces is made up of several important palaces: 1) the Mexuar, 2) the Comares Palace, 3) the Palace of the Lions and the Christian constructions added later and 4) the Partal Palace:

The time of entry to the Nasrid Palaces must be respected to avoid crowds, if you arrive late you will not be able to enter. See more information in Alhambra tickets.

Descover the architecture and history of the Nasrid Palaces with this unique .

How Long Does it Rake to See the Nasrid Palaces?

To see the Nasrid Palaces you need at least 2 hours.

The visit to the Nasrid Palaces begins with the Sala del Mexuar (Mexuar Hall). 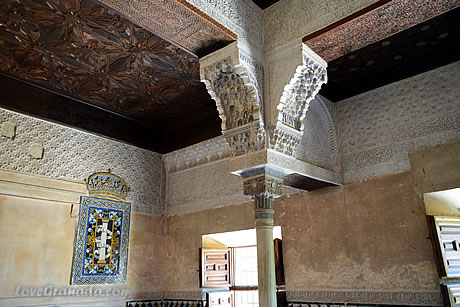 This palace, probably built under the mandate of Ismail I (1314-1325), is one of the oldest parts of the Alhambra, but it is also one of the most altered buidlings after the arrival of the Christian kings.

Mexuar (courtroom) was the place where justice was administered.

The hall was remodeled in the times of Yusuf I and Muhammad V, so very little remains from the time of Ismail I. 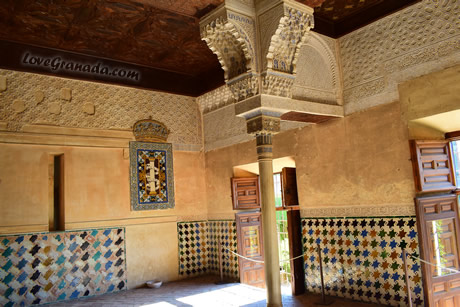 Note the four central columns, a clear example of the Nasrid style: the marble shaft topped with rings; the capital, of Almohad descent, with a cylindrical lower part and a square upper part.

In the 16th century an upper floor was added to this room and it was transformed into a chapel where a courtyard and the choir were placed.

Fortunately, the old Mexuar Oratory is still preserved. At the end of the room you will discover wonderful views. 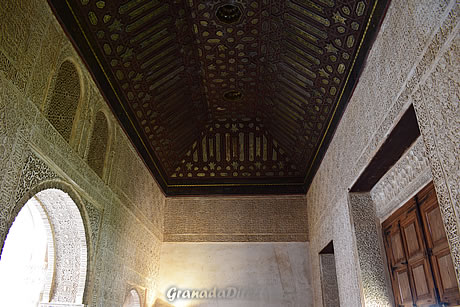 The Golden Room is from the time of Muhammad V and originally had a beautiful wooden roof for which it received that name.

However, today we cannot see it in all its splendor as it was remodeled by the Catholic Monarchs.

It was still an area for administrative and government tasks, probably used by court secretaries.

Courtyard of the Golden Room 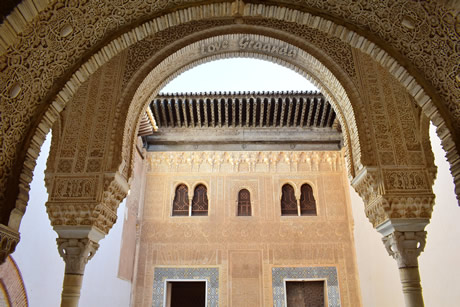 The Patio del Cuarto Dorado links the Mexuar with the Palacio de Comares. It is the border between the private area and the public area of the palace.

The sultan sat on this staircase to attend to government affairs. Behind him was the Palacio de Comares, the strictly private and family part.

The fountain was in the Patio de Lindaraja and was moved here in the 16th century. There is currently a replica of the original.

It is accessed through the Patio del Cuarto Dorado. The grandeur of its façade surprises the visitor and the small access doors hide behind them some defensive intention. 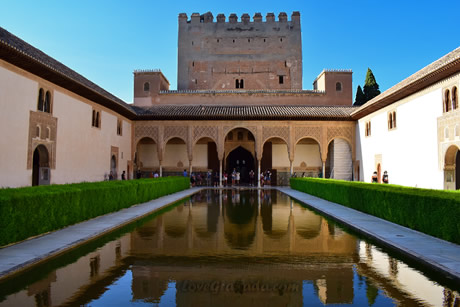 As soon as we enter through the door on the left, we cross a triple bend and find ourselves before the spectacular Patio de los Arrayanes, whose name comes from the plant that forms the hedges on both sides of the pool.

This large pool is the key to the patio. Two water jets, one at each end, feed the rectangular pond subtly and quietly.

And it is that the water must remain undisturbed so that the surface of the pond can act as mirror in which we can contemplate the reflection of the palace in all its grandeur. It makes us enter another dimension.

The Comares Palace is considered one of the jewels of the Alhambra.

It is distributed around the Patio de los Arrayanes, with several family rooms on both sides of the patio and on the sides smaller two beautiful porticoes behind which some towers rise. Among them is the magnificent Torre de Comares. 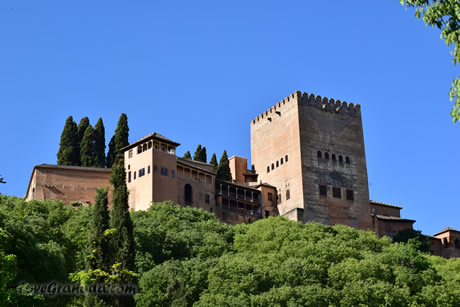 The Comares Tower stands out for being the tallest in the Alhambra (45 meters).

Apparently its name comes from the latticework with stained glass windows that adorned the balconies of the room that it keeps inside: the wonderful Hall of Ambassadors or Hall of the Throne.

The Hall of Ambassadors, built in the time of Yusuf I (1333-1354), is the largest Throne Room in the Middle Ages that is preserved. 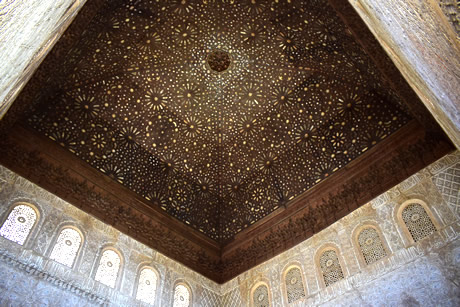 Its impressive carved cedar wood dome stands out. A heavenly vault made up of more than 8,000 pieces, carefully assembled in an ascending pyramidal shape, it symbolizes the seven heavens of Islam.

At the top, the central dome of muqarnas would be Paradise, from where divine light reaches us through a white star.

Under this dome and dominating the room sat the sultan on his throne , linking his power to divine power.

From here he could see a large part of the Patio de los Arrayanes and, reflected in the water, the windows of the upper floor, where we believe the harem was located.

The Palace of Lions 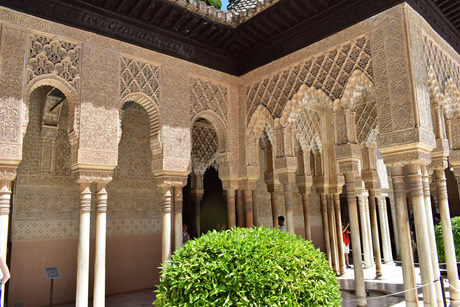 Once again the rooms of the palace are distributed around a patio. Without a doubt, the most famous courtyard and admired from all over the Alhambra.

Courtyard of the Lions

The Patio de Los Leones captivates us with its splendor and artistic richness, combining all the styles of Nasrid art. 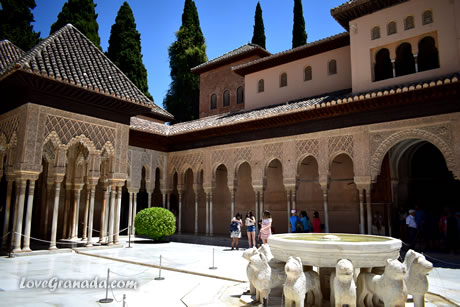 Upon entering, one is impressed by the forest of 124 columns of Macael marble that open like palm trees surround the patio.

Everything in this patio has its symbology: it is the happy garden that represents Paradise, bathed like this by four rivers.

The Fountain of the Lions is the symbolic center of the Alhambra. At the same time, masterpiece of Muslim sculpture and a masterpiece of hydraulic engineering. 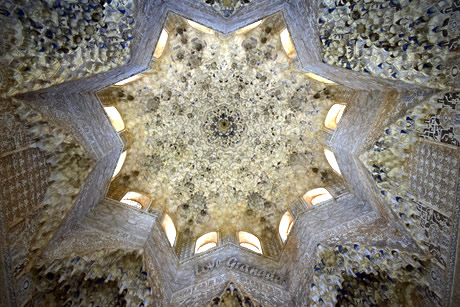 On the south side is the Sala de Abencerrajes, where, according to legend, 36 knights belonging to the to this important Granada family from the Nasrid period.

In the center, a fountain that carries water to the Fountain of the Lions through a channel.

Look up and see the impressive muqarnas dome forming an eight-pointed star beautifully illuminated by sixteen Windows. Above this room was the Harem, an area of restricted access even today. 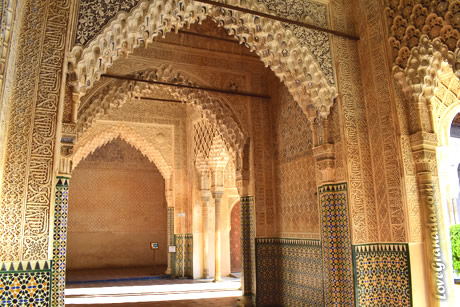 Unfortunately, many of the rooms in this beautiful palace were destroyed to build the Palace of Carlos V, but We still have some samples of what was one of the most beautiful palaces in Al-Andalus.

Hall of the Kings

The Hall of the Kings was used to rest and was the scene of the sultan's festivities. It measures 30 meters long.

All the ceilings are made of muqarnas and some polychrome remains are still preserved. 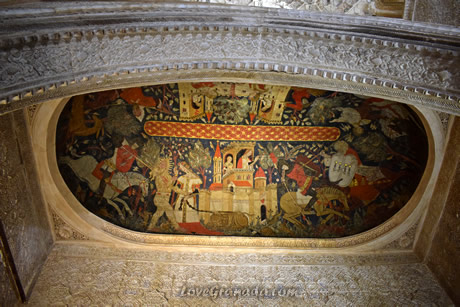 There are several small alcoves whose ceilings display paintings on leather.

In one of them there appear ten royal figures that seem to be kings of the Nasrid dynasty, hence the name of the room.

These paintings date from the 14th century and are a rare example of the figurative style that was so scarce in Islamic architecture of the time.

Room of the Two Sisters 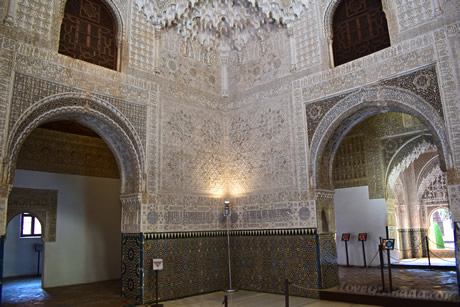 At the opposite end of the Hall of the Abencerrajes is the Sala de las Dos Hermanas, whose name seems come from the two large marble slabs on either side of the central fountain.

This was the central room of the Casa de la Sultana and stands out for its beautiful decoration.

When you visit the Sala de los Aljimeces you will see the beautiful wooden balconies with latticework, typical of the Nasrid tradition, which they originally protruded from the façade and give the room its name.

It is one of the few examples that already remain in Granada. 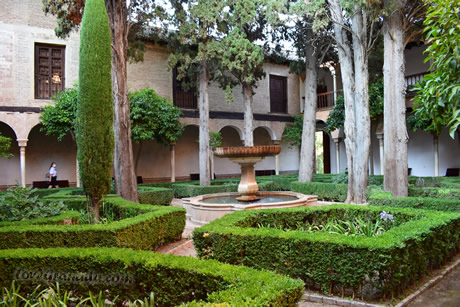 From the Lindaraja viewpoint you could contemplate a wonderful view of the Darro river valley and the old city of Granada, what is now the Albaicín neighbourhood.

However, we can now only see a patio with a garden, because when the Emperor's Rooms were built, these views were covered.

Its original name, which means "the eyes of the house of Aixa", now loses all meaning.

Still, this is one of the most beautiful rooms in the Palacio de Los Leones.

© Copyright • LoveGranada.com • Any use of the content, including copying of it in whole or in part is prohibited.
Opinions about Alhambra Palace
The palaces are beautiful

The palaces and the gardens are very beautiful and the views are spectacular. Take the audio guide for 6 euro per person, well worth it, provides a lot of information. When you buy ticket make sure that Nasrid Palaces are included, they are the major attraction.

Alhambra Tickets
Where and how to buy tickets for the Alhambra and where to collect them, what to do if tickets are sold out.
Home » Alhambra » Alhambra Palaces